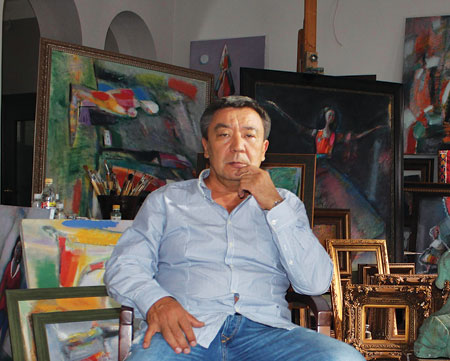 Much has changed in the home country of internationally renowned Kazakh artist Yerbolat Tolepbay over the course of his 40-year career. Kazakhstan has gone from an unknown, far off Soviet outpost to an independent nation whose people are now responsible for taking more control over their own lives. So it is no surprise that Tolepbay’s work has dealt so heavily with the human condition and the interplay between man and society.

“Our whole life is numerous inconsistencies, and inner conflicts, where expectations and reality don’t make sense,” the 57-year-old Honoured Art Worker of Kazakhstan told EdgeKz when asked what inspires him. “I am interested first of all in the man, and everything that has to do with him: the human feelings, worries, man as a component unit of society and society as many people.”

The Almaty-based Tolepbay, who is also a member of the Academies of Art of Russia, the Czech Republic, and Kyrgyzstan has exhibited in 35 countries, including recent showings in Jerusalem and Vienna. To each of those places, he brings a bit of Kazakhstan. “Certainly, a key feature of my work is that it belongs to the national culture,” he said. “But it is not only about Kazakh culture, and not in plot or in terms of content.” Instead, he evokes his culture in images. He evokes the country philosophically and metaphorically, rather than telling its tales. “Thus, the images of the Madonna of the Kazakhs, images of a caravan, the ‘Turikbii’ series – this is the symbolic embodiment of the Kazakh national culture.” His themes, however, are eternal: the realities and complexities of love for a person, a nation or a land. 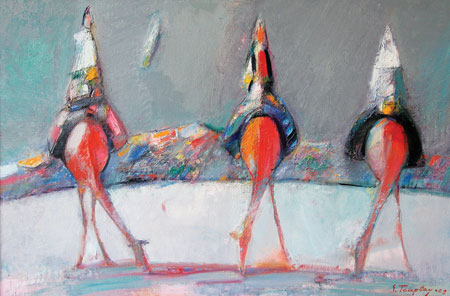 This winner of the 2006 Knight of the French Order of Arts and Letters was first inspired by his older brother, painter Tokbolat Toguzbaev. Kazakh artists Ali Dzhusupov and Zhanatay Shardenov have also been inspirations. And the greats, including El Greco, Pablo Picasso, Henri Matisse, Marc Chagall, Amedeo Modigliani have informed his work. But Tolepbay tells EdgeKz he always tries to find a unique voice in all of his work. “Before I start working on a painting, I do a lot of sketches inspired by real-life situations. But I do not copy these situations in the work. I avoid detail, plot, mirroring reality. I grind, I add… I have a huge desire to create something positive. It is important for me to feel that I was able to improve, become better, to find the right solution.”

One of the characteristics for which Tolepbay’s work is most recognized is his use of color. For all the dark times his country went through during the difficult Soviet era and the difficulties of transitioning to a new life, the artist’s palette remains full of bright color; the figures in his paintings are often, if not bathed in light, surrounded by flashes of intense, saturated hues. “Color is the main means of expression in painting just like the word in literature, the sound in music. It… allows us to express emotion, nature, subtle nuances of an action or an event. It can be tragic, dramatic, tense, or to express peace and harmony.” 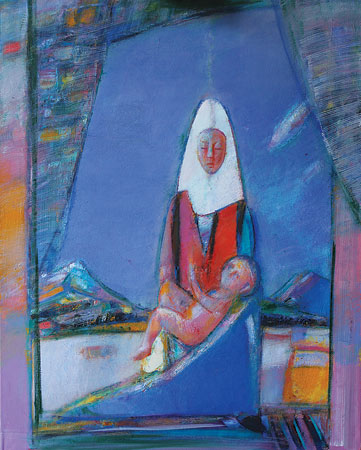 Among the challenges the artist believes Kazakhstan has faced in its transition to an independent nation over the last 20 years has been that art and the creation of art have become secondary to other concerns in the country. The difficult and subversive conditions present during the Soviet era that often inspired art have been removed. “Before independence, art was being created on a higher artistic level. The art then was quality, but it had elements of orders and requests. You can see and feel this in it. Today, fortunately, that sense is absent. But today, there is no interest in art, which there was in Soviet times,” he said. “In the early 1990s, visual art was well developed. There was a huge interest from the public, collectors appeared, galleries were opening; the art market awakened. Unfortunately, over the past five or six years that process has fallen off sharply.”

Much of Tolepbay’s recent work has been exhibited under the title “Inconsistencies” or “Discrepancies”. This seems appropriate for a painter who has seen his country achieve independence and artistic freedom, but has also noticed a decline in some aspects of creativity as constraints that used to force a subversive creative spirit have fallen away. Tolepbay sees that capitalism has brought Kazakhstan prosperity in the 20 years since independence, but says that that prosperity “is not applicable to the artistic sphere.”

Tolepbay is quick to point out, however, that the prosperity his country has experienced does not mean art is dying out or not growing. And, he says, the Western influences it has brought have actually meant more exposure for Kazakh artists. “We, the artists, are trying to maintain ourselves at an international level. So many young artists exhibit their works in cooperation with Western galleries.”

And, he adds, Kazakh art remains unique and the future of Kazakhstan’s artistic community and spirit lies in the hands of Kazakhs. “We cannot adapt the Western theories to our local soil. As the new cities are built, so should new art be built. Then we can sustain it at the international level,” he said. He also calls on the government to help revive the country’s interest in art. “It is necessary to change policy in the sphere of art – art and literature – the state needs to do that… I call on the leadership to change attitudes about art,” he said. “The desire and the historical basis are both already in place… In Kazakhstan, arts and crafts have deep roots.”

In the end, however, Tolepbay says art is above political change. “The word ‘independence’ for me personally is expansive and abstract. A person is independent when he obtains a stable base, reliability, and multi-faceted connections,” he said. “In my work, I try to understand the nature of the relationships between individuals, get inside the complicated world of the human soul.” 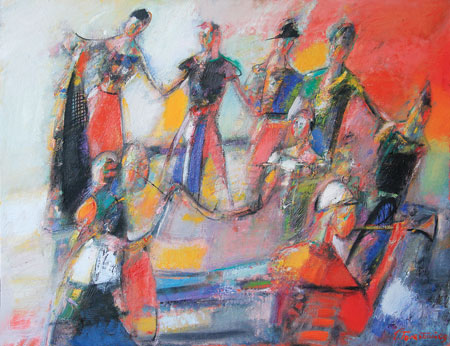 A Renowned Career
Before he even graduated from the art and graphic design program at Abay State University in Almaty in 1977, Yerbolat Tolepbay was exhibiting his work. Currently, his work is displayed in the State Tretyakov Gallery in Moscow, the Kasteyev State Art Museum of the Kazakhstan Ministry of Culture, and regional museums in Kazakhstan. He has exhibited in 35 countries, most recently in Russia, France, England, Uzbekistan, England, Israel and, this year, Vienna, Austria.

Tolepbay’s work, in which one can see a blend of European techniques, Eastern colors, Kazakh imagery, and universal themes, has won him nearly a dozen awards and titles over the years. Among these are the State Prize of Kazakhstan, the Merenti Medal for Artistic Contribution to Kazakhstan, the highest award of the EUROUNION, the bronze medal at the World Biennale of Artists in 1998, and a Knighthood from the French Order of Arts and Letters, among others.