HomeNationalSouthern Kazakhstan: Exploring the Wonder of ...

Southern Kazakhstan: Exploring the Wonder of the Ancient 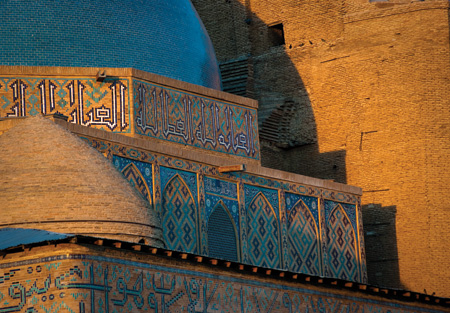 Living and working in bustling metropolises in Kazakhstan or abroad, life moves at unprecedented speeds. Smart phones and iPads give us instant access to information and people. And we live in a world of entertaining diversions where a minute of silence makes us feel uneasy. So it is easy to forget the value of history and roots. It is easy to overlook the beauty of the ancient.

The south of Kazakhstan offers us the opportunity to remember the value of the ancient and to appreciate what came before us with its sweeping landscapes and ancient structures that have withstood history, witnessed revolutions and remained steadfast in form and spirit as the world has changed around them. These are holy and sacred places preserved by each new generation.

In the south, you’ll find ancient towns and preserved mausoleums and see untamed horses chasing each other across Kazakhstan’s vast steppe. You’ll find enchanting lakes, green forests with mighty mountains and cool breezes that blow down the mountainsides. The southern section of Kazakhstan offers truly amazing scenery and an open, fresh air that tickles the throat. All of this welcomes those who enjoy beauty and can appreciate the cultures, landscapes and structures that have been around for centuries.

EdgeKz recently returned to the region to pick out some of the highlights of what those with a few days and an adventurous spirit will experience in one of the most unique corners of Kazakhstan.

The Hodja Ahmet Yassaui Mausoleum was built in 1398 by the order of Timur the Lame. It is said that Timur murdered all those who have had their hand in building the Mausoleum so that no one would reveal the secrets of the construction of the holy wonder. And they must have been valuable secrets as the structure stands today as the centerpiece of the ancient city of Turkestan.

Hodja Ahmet Yassaui, for whom the mausoleum is named, was an active Islamic preacher who is purported to have lived for 126 years. It is believed that this Sufi thinker lived half of that time in a specially constructed underground facility about 100 meters from the Mausoleum. He lived in the underground bunker on the belief that since Muhammad lived only 63 years, Yasaui didn’t deserve to see daylight for more than that time either. There Yassaui wrote Holy Scriptures, expounded on the imperfections of the world, called for kindness among people and unveiled the wonders of Islam.

When approaching Turkestan, the Hodja Ahmet Yassaui Mausoleum mesmerizes even before you arrive as buildings of more than four stories are prohibited in Turkestan to allow the ancient wonder to dominate. The building itself is 39 meters high, 62.5 meters in length and 46.5 meters in width. The structure attracts thousands of visitors per year and in 2003 was added to UNESCO’s World Heritage Site list. 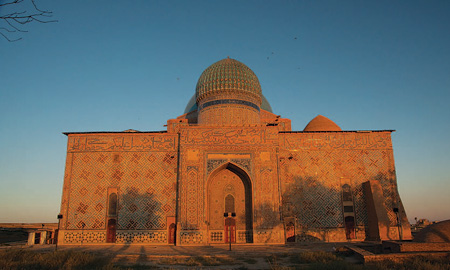 The mausoleum’s main entrance’s arch is 18.2 meters tall, which is quite impressive when looking up while standing in the entrance. Inside the first room is the main Kazandyk room, which features an 18-meter dome that curves 36 meters above the ground. In the middle of the structure is a “Taikazan”, or huge boiler, that weighs two tons and can hold up to three tons of water. It is said that water could be sanctified if saints spoke to it for enough time and that plants could either die or grow quickly depending on what kind of water was used in cultivation. And this enormous boiler was for that sole purpose – to sanctify the water and then wash sins away with it. There is also a burial vault, a mosque, a well, a dining room, a library, and the tombs of famous Khans and their Bi’s (Bi’s were a form of “advisors” and the word is pronounced “bee”). It is said that 21 Khans were buried on the territory of the Mausoleum. One of them was the Abylai Khan. He was one of the first Khans, who, with the help of the Russian Empire, defeated the Mongolian ancestors in the 18th century and united the divided Kazakh tribes.

The entire structure has 34 rooms. The walls are two meters thick and the whole construction was built without a single nail. Numerous researchers, such as the famous Soviet archeologist Mikhail Gerasimov who was sent on an expedition by Stalin to research the life and deeds of Timur the Lame were unable to find out why modern scientists could not reproduce the same type of ceramic walls as were produced back in the 14th century. The complex also includes a Hamam (eastern sauna, or steam bath). The facility is constructed to keep three rooms at certain temperatures, without doors. It’s quite mesmerizing how the rooms preserve certain temperatures without doors separating them. There’s the steam room, the cold room and the main room. The walls are one meter thick and the doorways are only about 150 centimeters tall. Perhaps this is the ancient secret – to keep the doorways low and make thick walls. There is also a drying room at the entrance, which when the Hamam is fully functioning generates air along underground mines to dry visitors who stand on small wooden bars and allow the air to blow over them.

The Hodja Ahmet Yassaui Mausoleum is one the world’s most precious historical sites. It heard the cries and whispers of the ancestors of Kazakhstan’s Khans throughout centuries and carries their spirit this day.

When Traveling to Turkestan… 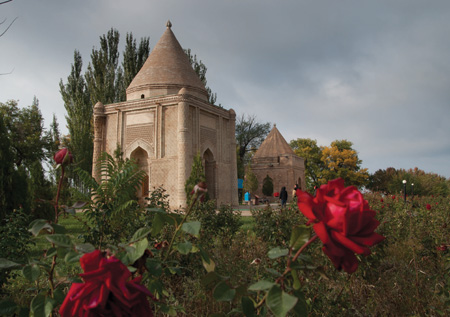 If you are travelling to Turkestan, make sure to learn a few Kazakh words. Locals in the region really enjoy and respond well to the relatively small number of Europeans and other foreigners who can speak a bit of the native tongue. And if you are lucky enough to find a translator, the locals are happy to share their stories about the local Batyrs – or heroes – that once hailed from Turkestan (ancient name – Yassy). Turkestan is a small town and it’s easy to find your way around. The mausoleum is in the town center and can be seen around Turkestan. The best hotels are the Turkestan and Yassaui hotels. The two hotels are across the street from one another and about a 10-minute walk from the Mausoleum. Make sure to also visit the new Ethnographic Museum which is right next to the Mausoleum, where you can learn about the history of Kazakhstan from the Stone Age to modern days, including the Soviet era and the latest plans for the town. Every year Turkestan hosts thousands of Muslims who come from all over the world to holy lands seeking blessings from the shrines of the Hodja Ahmet Yassaui Mausoleum.

A few hours east of Turkestan is another ancient Kazakh town known as Taraz. Taraz is actually older than Turkestan by 500 years and celebrated its 2,000th anniversary in 2002. Taraz is multicultural with lots of Russian speakers and boasts a broad history as a vital stop along the ancient Silk Road. However, it is a love legend that forever conquers the hearts of Kazakhs.

There are 28 different variations of the beautiful love story of Aisha Bibi and Kara Khan. The most famous goes something like this: There once lived a Kazakh Batyr name Kara Khan, the ancestor of Karakhanids and the ruler of Taraz. He fell in love with the daughter of his nemesis, Zengi Baba. Together, Kara Khan and the daughter Aisha escaped against the will of her father. Upon discovering the treachery, the father ordered his guards to murder both. As the two lovers were escaping, they stopped at the Asu River to rest. It was there that someone secretly slipped a viper into Aisha’s “saukele” (a cone-shaped national Kazakh women’s hat that is worn by future brides). When she put the saukele back on, the viper bit her. Kara Khan was so desperate to marry Aisha, that he carried her to the closest village so a Mullah could marry them. But the viper’s bit was too much and Aisha lived only a few moments after they were wed. She died in Kara Khan’s arms. Kara Khan vowed to love her forever and to his last day he lived near where she was buried. There he asked the heavens to forgive him and he ordered built the most beautiful mausoleum in the world to honor her.

Aisha Bibi Mausoleum
The Aisha Bibi Mausoleum is located about 18 kilometers from Taraz. There is no official information as to when it was constructed. It has become a tradition to this day, however, that newly-weds visit the mausoleum to pay their respect and ask blessings from Aisha Bibi. It is a 7.6 meter square-shaped building with a cone on top. Aisha Bibi’s tomb is visible through open doors as you approach the Mausoleum. The outside walls are decorated with carved terracotta tiles with more than 60 patterns. The walls are also more than 80 cm thick and made of a kind of ancient brick. Next to the main mausoleum is a smaller mausoleum built for Aisha’s best friend Babadji Hatun, who lived at the place of Aisha Bibi’s death near the mausoleum and took care of the tomb during her life. Babadji Hatun was Aisha’s closest and most loyal friend. She was buried 20 meters to the right of Aisha Bibi’s mausoleum. 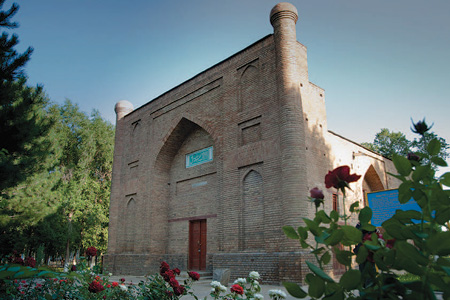 The resting place of Aisha’s would be husband, Kara Khan, can be found within the Taraz town borders near the town center. The Kara Khan Mausoleum was constructed in the 11th century to honor the ruler of Taraz, Kara Khan. The square shaped mausoleum is famed for having over 30 specially made types of brick used in construction. A huge dome sits atop the brinks and can be seen from around the city and beyond. The mausoleum has four small rooms at each corner, one of which includes a spiral staircase leading to the roof. In the center of the mausoleum’s main room is the tomb of Kara Khan. The mausoleum is fenced and surrounded by trees, which often obscures much of the structure during spring and summer.

On the outskirts of Taraz, on the mountainous bank of the Talas River, about three and a half kilometers from the town center is another unique attraction called Tekturmas, or a place of “worry.” A winding walkway of fragmented rock leads up and down over the rolling landscape to the tomb of the great Kazakh Batyr Mambet. And about 10 to 12 meters further is the mausoleum where the Saint Sultan Mahmud Khan was buried. In 1934, that mausoleum was destroyed. But it was rebuilt in 2002 on the threshold of Taraz’s 2000th year celebration. Beyond carrying an ancient holiness, this little mountain spot also offers breathtaking views of Taraz and the surrounding landscape. It is beautiful scenery and definitely worth the short hike from town.

So take a break from your busy trip and urban life. Put down your iPad and your email alerts for a few days and explore the history and wonder of ancient Kazakhstan.