HomeNationalThe Nazarbayev Center and its Director

The Nazarbayev Center and its Director 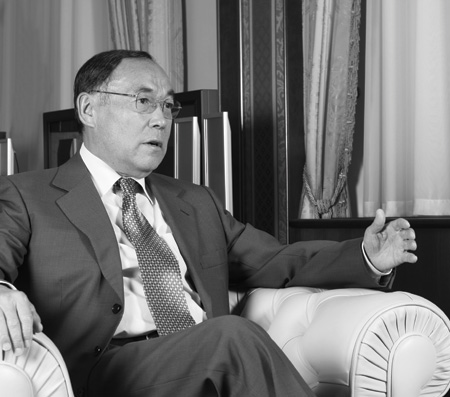 For Kanat Saudabayev, running the new Nazarbayev Center in Astana is the culmination of a lifetime’s work.
The center, recently launched, is the country’s premier institution for the political and humanitarian development of Kazakhstan internationally and domestically and for the preservation and studies of the nation’s history of statehood. Secretary of State Saudabayev is uniquely suited to this role as he has played a major role for decades on the country’s pre- and post-independence development. He is also a nearly lifelong associate and close advisor to President Nursultan Nazarbayev. Both came up and served through the old Soviet system and into the nation’s new independence.

Born near Almaty (then known as Alma-Ata), in 1946, Saudabayev didn’t start his career as a diplomat, but rather as a theatrical producer. He even served as Kazakhstan’s chairman of the State Committee of Culture, Chairman of the State Film Committee, and Deputy Culture Minister. However, his degrees from the Leningrad Institute of Culture and the Leningrad Academy of Public Sciences, and later two PhDs – one in Philosophy from Kazakh State University and the other in Political Science from Moscow State University – have suited him well for a life of public service.

Among his early important postings was as Plenipotentiary Representative of Kazakhstan in Moscow from September 1991 to May 1992 during the Soviet Union’s transformation into the democratic Russian Federation. By the time he left that post, Kazakhstan had become an independent nation. He then became the country’s first ambassador to Turkey – with whom the country maintains strong ties – and later ambassador to the United Kingdom of Great Britain and Northern Ireland in the 1990s. He was also a key contributor to Kazakhstan’s strategic partnership with the North Atlantic Treaty Organization (NATO) as a country’s signatory under NATO’s Partnership for Peace (PfP) programme. 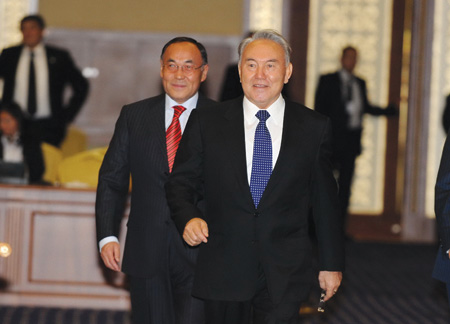 Importantly, Saudabayev also served seven years as Kazakhstan’s ambassador to Washington where he helped develop Kazakhstan’s strategic partnership with the United States. He is credited with playing major roles in developing bilateral cooperation in security, nuclear disarmament, strengthening trade and economic ties and ensuring U.S. support for Kazakhstan’s steps towards a democratic system.

Saudabayev has been secretary of state since 2007 and, from 2009 to 2011, served simultaneously as foreign minister. During that time, he prepared Kazakhstan for its ultimately successful 2010 chairmanship of the 56-nation Organization for Security and Cooperation in Europe (OSCE). As secretary of state, he has been the effective top advisor to President Nazarbayev and has helped shaped proposals on major domestic and international policies, as well as represented president and nation internationally.
Helping to create, shape and launch the activities of the Nazarbayev Center as its first director, with the center’s emphasis on both the political and cultural aspects of the country’s development, is a job for which Saudabayev’s lifetime of service has well prepared him.

In the pages that follow you will hear directly from Saudabayev on the new center and his role helping to preserve the country’s past and shape its future.

Q. What are the goals of the new Nazarbayev Center? 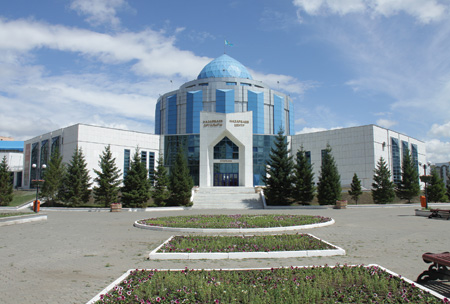 In this regard, our center conducts systematic studies of the formation and development of the newly independent state in Kazakhstan and contributes to the continuing social and political, economic and humanitarian, as well as cultural development of our country. To this end, the Nazarbayev Center ensures interaction and cooperation among state bodies, scientific and cultural institutions, as well as civil society institutions and mass media.

Our center also looks forward to furthering Kazakhstan’s international cooperation in the political, social and humanitarian arenas, as well as other fields. In this context, the center, along with the U.S. Embassy to Kazakhstan, recently held a conference, “Kazakhstan-U.S: 20 years of Partnership for Security and Development,” which underlined 20 years of fruitful cooperation between our countries as strategic partners. 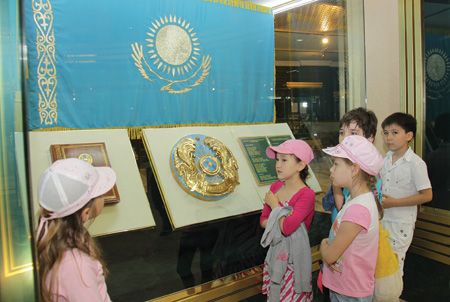 We hope the recently established Nazarbayev Center will significantly contribute to the continued strengthening and development of independent Kazakhstan, to the patriotic education of our citizens, and to the strengthening of our country’s role in the international community.

Q. In what ways will the Nazarbayev Center contribute to Kazakhstan’s multi-vector diplomatic strategy of ensuring security, cooperation and understanding in the world?

A. Kazakhstan has always stood and stands for the development of partnership, friendly and mutually beneficial relations with all states of the region and the world. A balanced multi-vector foreign policy promotes the coherent implementation of social, economicand political reforms, increases people’s welfare, and strengthens regional and international security.

Through that multi-vector policy prism, the Nazarbayev Center will promote and popularize knowledge about Kazakhstan and its role in the world community. In addition, the centre will seek to further Kazakhstan’s international cooperation and its contribution to ensuring security and mutual understanding in the world. The centre will share with the international community Kazakhstan’s experience as a leader of the global non-proliferation movement, as a successful multinational and multi-ethnic state, and as the driver behind various integration processes and a number of dialogue platforms for strengthening peace, stability and security.

Taking into consideration the difficult political and economic situation in some corners of the world, Kazakhstan can serve as a good example of the ways stability and harmony can lead to success. Generally speaking, the multi-vector policy’s balanced approach to international affairs has proven effective and forms the basis for the further successful development of Kazakhstan as a sovereign and independent state. 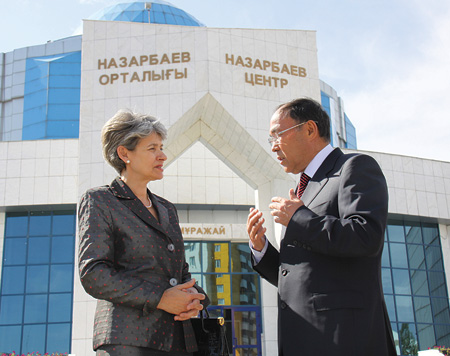 Q. Will the Nazarbayev Center be launching any projects in the United States or Europe?

A. Yes, the Nazarbayev Center will cooperate with organizations in various countries around the world, which share the goals of the center, including in the United States. Projects will include a variety of collaborative research, various international conferences, seminars and exhibitions. Currently, the Nazarbayev Center is working on the establishment of such cooperation with partners in Russia, the United States, and other countries.

Q. One of Kazakhstan’s most public roles on the international stage since gaining independence was its 2010 chairmanship of the Organization for Security and Cooperation in Europe (OSCE). How do you assessthe achievements of Kazakhstan’s OSCE chairmanship?

A. Kazakhstan became the first former Soviet state, the first state to the east of Vienna, where the OSCE is headquartered, and the first state with a predominantly Muslim population to chair the OSCE. I will be sincere in saying that our OSCE partners might have had concerns about the ability of Kazakhstan to effectively manage such a complex organization of 56 countries, four out of which are nuclear powers, located in the vast area from “Vancouver to Vladivostok”.

However, our country is well known for its active foreign policy and reputation as a moderator and facilitator, including its role as the driver behind various integration formats and as author of a number of international initiatives. Chairmanship of the OSCE was a task of a completely different level and scope, particularly during the current difficult political and economic situation in the world. At the same time, for many participating states, Kazakhstan’s chairmanship was associated with hopes to “restart” the organization itself. Developing the program of our chairmanship and implementing it, we strived to justify the trust vested in us by the 56 countries.

All of our OSCE partners realized the historic “restart” opportunity for the organization in convening its Summit, which is a regional platform for open dialogue and mutual understanding, reducing controversies, removing regional concerns and strengthening cooperation in Europe. Kazakhstan successfully accomplished that task. The fact that 56 OSCE participating states expressed their absolute support for holding the first OSCE Summit in 11 years in Astana in December 2010 speaks for itself.

The year of Kazakhstan’s OSCE chairmanship was significant and our partners appreciated our work, including its main outcomes – the Summit of the Organization and the adoption of the Astana Declaration. This was a truly historic, global-scale event when a young state with its own just 19-year long history was able to breathe “the Astana spirit” into the vital activity of such an authoritative organization. I should note that to a very large extent, the success of our mission as the head of the OSCE was due to the personal involvement of the President Nazarbayev, his diplomatic skills and respect within the international arena.

Q. How would you access Kazakhstan’s achievements on the world stage, and awareness of those particularly the West, since gaining independence 20 years ago? 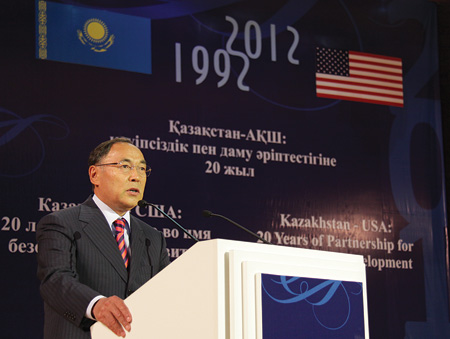 A. During just 20 years of its independence, Kazakhstan – starting as an unknown former Soviet Republic – has become a respected partner for the international community under the outstanding leadership of Nursultan Nazarbayev, its first president. Kazakhstan has a strategic partnership with the United States and with the key Western European countries. Kazakhstan and its president are recognized leaders in nuclear non-proliferation and the nuclear threat reduction process. Our economic success is also well known. Over the last 20 years, Kazakhstan has attracted more than $150 billion USD of foreign investments into its economy. Kazakhstan, in fact, was ranked 47th in the World Bank’s “Doing Business 2012” report marking the first time our country was listed among the top 50 most competitive economies in the world.

Q What are the achievements in your career of which you are most proud?

A. You know, it will be 50 years next year since I started working. I am proud not of any achievements, but of the fact that no matter where I worked, I always tried to achieve the goals at hand, and I like to think I have succeeded in that effort. I have
always followed the principle that Genghis Khan followed in his life: “The heart of every work beats to be completed.”

Q What advice would you give young government officials and diplomats based on your own career?

A. Besides patriotism and love of country, I would like to wish young civil servants and diplomats who take the path of service to the motherland every success in their endeavors. These young men and women, their knowledge and experience acquired over the years are the guarantee of our prosperous future.

Whoever they will become, whatever they will do, let them do it better than others and may they not forget that nothing in their path is impossible when hearts and minds are put towards it. And if this goal is to serve Kazakhstan and its people, my only advice is not to turn off the path and to fulfill their duty with truth and faith. And, of course, it is important, especially for a young country like ours, for our young people to always work on themselves, to continue progressing and to not stop as any pause taken in our rapidly changing and dynamic world would mean that you immediately fall behind others. So my call to them is to always keep going!