The pressure on Talgat Ermegiyaev is nearly as great as that on Kazakhstan’s Olympic athletes. The dynamic former Culture and Sports Minister this year accepted the chairmanship of the Kazakh Sport and Physical Culture Agency. His mission? To assemble a well-trained team of top athletes to bring home medals from the Summer Olympic Games in London.

That’s a tall order for any country, let alone one with only 20 years of independence and a young, though popular and well-funded, sporting sector. But 43-year-old Ermegiyaev doesn’t lack confidence. Early in 2012, he predicted to a Cabinet meeting in Astana that the Kazakhstan national team expected to win at least 3 gold medals at the London 2012 Games.
“Our athletes must successfully perform at the Olympics and show results higher than at the previous Olympic Games in Beijing – to win at least three gold medals against two won in Beijing. Totally, we plan to win over 13 medals,” he said.

The Kazakh national team will be most heavily represented in London in the weightlifting, boxing, water polo, and track and field categories. Eight weight lifters, nine boxers, 13 water polo team players, 12 track and field athletes and male wrestlers in various categories have already qualified for London and more will likely follow them. According to Ermegiyaev, at least 74 Kazakhstan athletes from a minimum of 16 sports have won spots in the London Games. By the time the Games start on July 27, more than 100 Kazakh athletes are expected to have qualified from at least 25 sports.
Ermegiyaev told EdgeKz that he thought the Kazakh Olympic team was particularly strong in its boxers and weightlifters. “We also plan to win medals in wrestling, shooting, both artistic and rhythmic gymnastics, judo, track and field, cycling, water polo, canoe and kayak, fencing and tae kwon do,” he said.

Ermegiyaev has already chalked up a record of success in delivering a network of world class training facilities for Kazakhstan’s young athletes. “We have been able to give them a wide range of modern centres to train in,” he said. “These include the Baluan Sholak Sports Palace, Water Sports Center and Central Stadium in Almaty and the Kazakhstan Sports Palace and Sary Arka Republican Cycling Stadium in Astana.”

The Kazakh Sport and Physical Culture Agency Chairman sees the strength of the current high-profile national Olympic team as a logical result of the well-established network of sports training facilities for children, teenagers and young people that the government has funded across the nation. Among these are the Children’s and Youth Sports Schools (CYSS) and Boarding Schools for Gifted Children in Sports (BSGCS), he told EdgeKz.

“During the preparation for the Asian Winter Games in Kazakhstan, a ski and biathlon stadium was constructed in the Soldatskoe Gorge in Talgar in the Almaty region,” Ermegiyaev said. “We also built a new international complex of ski trampolines in Almaty, the new Republican Cycling Track, the Alau Skating stadium in Astana, the Astana Arena indoor stadium and we rebuilt the old Medeo sports complex in Almaty.”

Not only was the event the largest international sports festival ever held in Kazakhstan or anywhere else in Central Asia, but Kazakh athletes were in top form beating out famous international stars from far larger nations like China and Japan to win a broad sweep of victories.”The supporters of Kazakhstan well know the champions and finalists of the World and Asia’s championships,” Ermegiyaev said.

With impressive achievements already on the world stage, Kazakhstan in a few years could become a sporting success comparable to such nations as Australia and The Netherlands. Those countries have comparable populations, are also economically prosperous and have populations passionate about sports. They also regularly win international medals in greater numbers than their relatively small populations would suggest.

President Nursultan Nazarbayev shares Ermegiyaev’s enthusiasm for the development of sports in Kazakhstan. Nazarbayev sees the national effort required to field a world class Olympic team as an opportunity to increase the sports and training infrastructure around the country. “Large scale work is under way for the construction of sports complexes. In addition, the reconstruction of stadiums, sports grounds and facilities is under way as well,” the President said. “It is important that (these facilities) serve the people of Kazakhstan so that a large percentage of the population gets involved in sports.”

Ermegiyaev appears ready to take on that challenge. He served as sports minister from April 2011 to January 2012 and as vice minister for three years before that from 2008 to 2011. This background has given him familiarity with both the problems and opportunities for making Kazakhstan a sporting success. And Ermegiyaev’s enthusiasm for Kazakhstan’s Olympic adventure and sporting future is infectious. When asked what advice he would give to young people starting out, his answer could serve as a roadmap to developing Kazakhstan’s Olympic future. “They must develop persistence, determination in achieving their predetermined and planned goals and make up their minds to continually best their own personal records. Then all their wishes will come true.”

At 28, Serik Sapiyev is a seasoned veteran by sporting standards. The popular Kazakh boxer is also a two-time world champion having won the amateur world light welterweight title twice in 2005 and 2007.
Today, Sapiyev is also captain of Kazakhstan’s national boxing team focused on the upcoming Olympic Games in London. He also recently moved up a weight class and told EdgeKz in an exclusive interview that winning gold in the new weight class will be a tough fight. “It’s a bit harder for me,” he said. “I was a double world champion at 64 kg and now I box in the 69 kg category. It is difficult to box against guys who are heavier. But if I have to fight against a heavy guy with less knowledge in boxing than I have, I think I can still beat him.”

Sapiyev won his first world title in 2005 when he beat Dilshod Mahmudov. He then went on to capture a bronze medal in the 2006 Asian Games. Olympic gold medalist Manus Boonjumnong defeated Sapiyev in a semi-final bout that year, but the Kazakh boxer still managed to knock down the eventual champion. In 2007, he won his second world title defeating Gennady Kov from Russia. But his success in the ring isn’t all past glory. On May 4, Sapiyev beat Lakhbir Singh of India in a one-sided fight which ended
when the referee stepped in to protect Lakhbir.

Sapiyev began his march toward boxing success early. “I started practicing in the ring at age 11,” he told EdgeKz. “I was 21 years old when I finally made it onto the national level.” He won his first world championship that same year. Sapiyev was born in Abai in the Karaganda region and later attended Karaganda State University. There he received degrees in law and physical education. He also received help on his journey to becoming an elite athlete. “I got an apartment in Karaganda city and the city and regional authorities there helped me a lot… There are still good people there who continue to help me a lot. Financially, the national boxing federation funds me as well.” 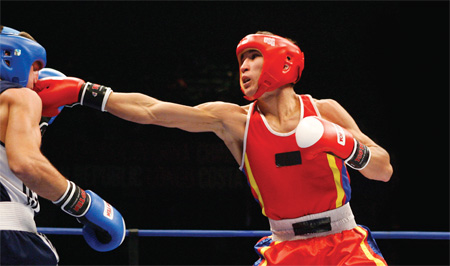 Young boxers would also be wise, says Sapiyev, to pay attention to those who are trying to help them. “Be patient, work hard and listen to your coaches,” he advises. “They are your mentors. This is the best thing you can do at the beginning of your careers. It’s the secret to becoming skillful and successful. You must always want to learn and do better.” As for the champion himself, he says he doesn’t have any boxing idols, but is a student of the sweet science in general. “I like good boxing and I admire good boxers. When I see anyone boxing well, it gives me pleasure just to stand back and watch them do it.”

And though Sapiyev as a veteran fighter is a storehouse of knowledge, he’s not yet ready to pass the torch to the next generation of fighters. “No, I don’t even think about coaching yet.” Right now Sapiyev is so focused on preparing himself and his fellow boxers on the national team for the Olympics that he hasn’t given any thought to what he will do afterward. “And for now, I don’t want to,” he said. “I will think about it after the Olympics!”

Competing on an international stage in front of millions of spectators is nothing new for Kazakh high jumper Marina Aitova. The London Olympic Games will be the third for the striking, statuesque blond athlete from Karaganda. She represented Kazakhstan in the 2004 Athens Games and the 2008 Beijing Olympics.

Twenty-nine-year-old Aitova is still looking for her first Olympic medal, but winning gold in international tournaments is a common experience for her. She won the high jump competition at the 2003 Afro-Asian Games in Hyderabad, India, at the 2006 Asian Games in Doha, Qatar, at the 2007 Universiade Games in Bangkok, Thailand and at the 2010 Asian Indoor Championships in Tehran, Iran. And she proved she is still a global threat at the 2011 Asian Games in Kobe, Japan where she won the bronze medal. “I started my training at the age of 12 and the high jump when I was 15. Now I am 29, so I have plenty of experience in my event,” she told EdgeKz. 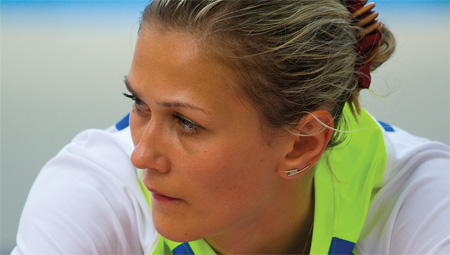 Aitova was born and raised in Karaganda and has been a part of the Kazakh national Olympics team since she was 17 years old. But she is more than just an athlete. She graduated from Karaganda’s Economic University in 2002 with a degree in international economics and this year will graduate from the Academy of the Ministry of Interior Affairs of Kazakhstan. She is also a parent juggling the challenges of international competition and motherhood. “My granny is bringing up my child as I am often travelling. I try to take my son with me when possible. I would have had more hardships without the help of my relatives,” she said.
But balancing the demands of academia and motherhood with the rigors of international level competition has not dampened Aitova’s enthusiasm for her sport. “At this time, our sport is getting attention. For the kids, there are good conditions being created for training,” she said. “Our stadium was re-constructed and new equipment was installed.”

She also continues to seek inspiration from other elite athletes. “In Kazakhstan, there are lots of first-class athletes like Olga Rypakova, Dmitry Karpov, the Croatian Blanca Vlasic, Anna Chicherova, high jumpers. I try not to admire them, but look at them as good examples,” she said.

Aitova also told EdgeKz that despite having competed in two previous Olympics, she has no plans to retire anytime soon. “After the Olympics, I am planning to rest a bit and then I will start getting ready for the Asian Games,” she said. “My best results so far are my bronze medal at the World Cup, my gold medal at the Asian Games, and I hold a record at the Asian Games in indoor facilities. I hope in the future I will attain even higher results.”