HomeNationalA Man and His Eagles: A Steppe Tradition

A Man and His Eagles: A Steppe Tradition 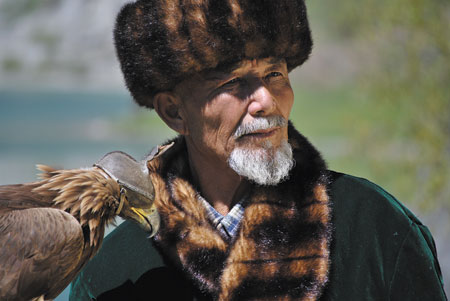 The old expression says that a dog is man’s best friend. And that might be true for some. But in Kazakhstan, eagles reign supreme. And one long-time Kazakh resident has dedicated his life to the birds.

“To be a falconer (one who hunts with eagles or falcons), you have to accept this lifestyle. Maybe I don’t know a lot about the Internet or how to drive the newest automobiles, or who is the latest boxing champion, but I’ve lived in the steppes and the mountains, and at 10, I had my own little falcons and at 17 my first eagle,” 71-year-old falconer Abylkak Tarlybayev told EdgeKz. Tarlybayev was born in the Tarbagatai Mountains of China, but has lived most of his life in rural Kazakhstan training and hunting with these majestic creatures. Tarlybayev holds a unique place in Kazakh culture as hunting with eagles has been part of the life of the Eurasian steppe for centuries and he is carrying on that tradition.

Tarlybayev has had about ten eagles over the course of his life and some have become like family. “Some say they live about 80 years, some say 120 years. Where I used to live, there was a falconer there who had an eagle for 40 years. Of course, over time we bond and they are a part of my family now.” Tarlybayev says it only takes three to four weeks to train eagles to hunt, but requires lots of patience, as well as meat, liver and chickens to feed and train them with. But over time, a bond forms and 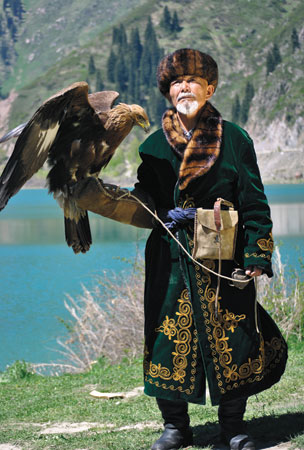 eventually the birds see him as their master. “My birds recognize me by my voice. I use specially designed rope to tie up their feet to ensure they don’t fly away from me. But in the winter, I don’t tie them up. They don’t fly away in winter,” he said, adding that his birds hunt mainly in the winter and are used primarily for fox hunting.

And though eagles are considered among the fastest and most fierce of the flying predators, Tarlybayev believes the birds are misunderstood. “I know they have a good heart. It is in their eyes,” he said. “I feel their mood every day and every season.”

Eagles: A symbol of a Nation
Birds of prey have been chosen by many countries to grace their flags and other national symbols. Eagles, particularly, are revered for being noble and fearless. In Kazakhstan, the steppe eagle is a key representative of the nation. A flying eagle with its wings spread was chosen to be placed under the 32-rays of the Sun on Kazakhstan’s national flag along with other central images. It was adopted June 4, 1992.

The placement of the bird on the flag honors a cultural tradition dating back, according to some histories, to 2000 BC across the vast Asian steppe, including China and Mongolia and as far away as Iraq. Ancient Kazakh khans, or leaders, mastered the skills of falconry, passing the knowledge from generation to generation. And still today in Kazakhstan there are falconry tournaments where those, such as 71-year-old falconer Abylkak Tarlybayev (profiled here), who have dedicated their lives to these animals can show off their skills and passion.