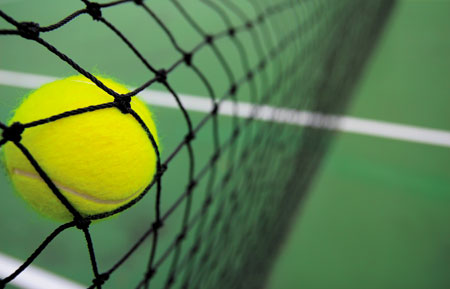 The growth of tennis’ popularity in Kazakhstan and the rise of its best players into the top global ranks have been meteoric. Top players are flocking to the country, everyday Kazakhs are taking up the game and tennis courts are being built around the county. Tennis may not be the first sport associated with Asia and the East, but Kazakhstan is as much West as East and that’s becoming apparent on courts around the country and outside its borders.

The game has really started to breakthrough in Kazakhstan over the last five years. Tennis was seldom watched as late as 2007 and no Kazakh team since national independence in 1991 had had significant success in international tournaments. But in the three years following 2007, the sport caught fire. In 2010, Kazakhstan fought its way for the first time in its tennis history into the top rank of the global elite – the Davis Cup World Group. And they did so in convincing fashion crushing Switzerland five matches to none. In that same miraculous year for Kazakh tennis fans, the great, Russian-born Kazakh citizen Yarolsava “Slava” Shvedova burst onto the world scene at age 22 and won back-to-back Grand Slam doubles tournaments at Wimbledon in Britain and the U.S. Open at Forest Hills, New York. And in the summer of 2012, Shvedova made Wimbledon history by playing the first perfect singles set in at least 44 years. Shvedova won the first set of her match without losing a single point or making a single error in 24 plays. In doing so, Shvedova accomplished the “Golden Set” and achieved a feat that neither Pete Sampras, Bjorn Borg nor Martina Navratilova ever accomplished.

The impact of the success of Kazakhstan’s best players on the popularity of the sport among general Kazakhs has also been buoyed by the recent spread of satellite and cable television in Kazakhstan, which has made watching matches and following Kazakh stars easier. Tennis has also traditionally been a sport of Western elite, which may help explain its rising popularity here as the country has enjoyed over the last 20 years a 12-fold, or 1,200 percent rise in their per capita standard of living. And tennis is also a sport that moves easily from indoors to outdoors, which matches well Kazakhstan’s brutal winters and hot summers. It’s also certainly helped that the nation’s popular President Nursultan Nazarbayev is a huge fan and has supported the growth and establishment of facilities around the country. Centers such as Astana’s Daulet Tennis Complex, websites such as tennis.kz and independent coaches and academies are now filled with enthusiastic converts.

All of this progress has not happened by accident. The Kazakh Tennis Federation has been hard at work over the last few years encouraging the region’s best players to come and live in the country and adopt Kazakh citizenship. But it has also brought in legendary coaches like Eric van Harpen, the former coach of the revered Anna Kournikova, to work with the Kazakh national team. “There is an agreement between our tennis federations to help each other out,” Russian Davis and Federation Cup Captain, Shamil Tarpischev told Russian Television in an interview in September 2010. “This has managed to help a lot of (Russian) tennis players, as they have been able to get extra funding from the Kazakh federation which helps them to develop.”

Whether it’s a public court in Karaganda or a packed stadium at Wimbledon, Kazakh tennis is enjoying a golden age. To take a look at this, EdgeKz interviewed two of Kazakhstan’s most elite professionals, Shvedova and male star Andrey Golubev, to talk about their success and the rise of the sport’s popularity. 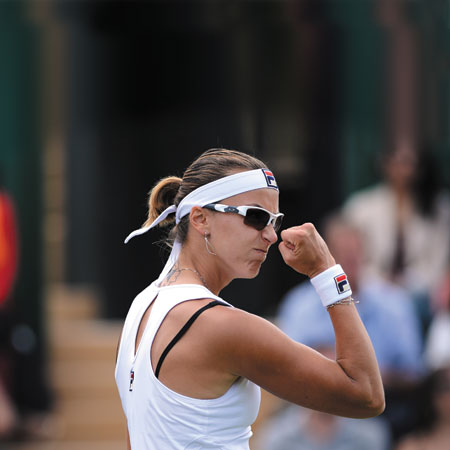 In less than four years, Yaroslava “Slava” Shvedova has burst on the scene to become Kazakhstan’s outstanding female tennis star. And just this summer, the 24-year-old Russian-born Kazakh citizen made tennis history by playing the first “Golden Set” at Wimbledon in at least 44 years.

During Slava’s third round match in June against French Open runner-up Sara Errani, Slava won the first set without losing a single point. ESPN reported that it is the only perfect set in the history of women’s professional tennis and the first perfect set in a Grand Slam tournament. “She was impossible to play against. I don’t even feel like I played terribly. She just was hitting winners from every part of the court,” Errani said of Slava after the match, according to ESPN.

It was a great moment for Slava, who went on to win the match, and the culmination of a lifetime’s effort. “I started playing tennis just for fun when I was four and a half,” Slava told EdgeKz. “Then when I was eight my dad (who coaches tennis and running) started coaching me. I made up my mind to turn professional when I was only 13. That was when my parents asked me if I wanted to go on playing or do something else. You can guess what my answer was…I’ve had quite a few coaches in my career but my dad still stays involved helping me with my tennis.”

She couldn’t have had a better teacher. Her father Vyacheslav was a world class coach and her mother Nurzia had been a world champion athlete herself having won the International Association of Ultra Runners 100 Kilometres World Challenge in 1992.

Slava became a Kazakh citizen in 2008 and applauds the surging popularity of the sport in her adopted country. “The Kazakhstan Tennis Federation does really a lot to help the young tennis players, promote tennis by opening new tennis schools all over the country. I think in the near future there is going to be a lot of players from Kazakhstan. There are so many talented guys and girls in the country,” she told EdgeKz.

Slava has played for the Kazakh national team since 2008 and is pleased with the success Kazakh players have been enjoying on the international stage. “For me it was a great opportunity to play in the Fed Cup team and to be a top player for the country. I am very proud to play for Kazakhstan and it’s great that we are becoming a recognized tennis country now,” she said.

Slava is also being recognized for her own success. She was ranked fourth and fifth in the world in women’s doubles in 2011, a career high. In 2012, she has kept up the same high standard. In May, she and doubles partner Galina Voskobo reached the final of the Estoril Open in Portugal for the first time by their dramatic defeat of Sania Mirza from India and her partner Anastasia Rodionova from Australia in a hard-fought 6-3 7-6 (6) contest in the women’s doubles semifinals here. And then, of course, Slava made international news for her record setting Wimbledon performance. “I had no idea. I was just playing every point and every game,” ESPN reported Slav as saying after the match.

Slava’s schedule now takes her around the world. In just a three month period in 2011 she was in Buenos Aries in Argentina, Shenzhen in China, Melbourne in Australia, Bogota in Columbia and Monterrey and Acapulco in Mexico. And at press time, Slava was schedule to play the Summer Olympics in London. And, she says, her passion for the game continues to grow.

“Tennis is my career and I love it,” Slava says. “If you want something really bad, and if you strive for it and believe in it then everything will come true!” she said, adding a note to aspiring young players. “Enjoy the game, after all it is a game and you’ve got to play games!” 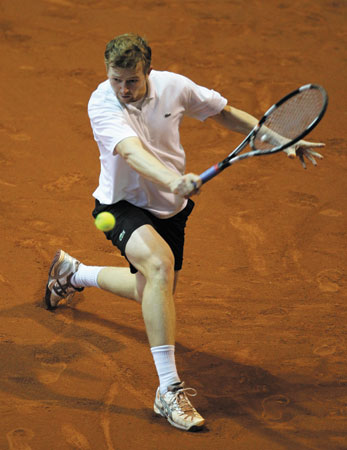 Andrey Golubev and Kazakhstan were made for each other. The 25-year-old rising tennis star is a global citizen who has found his global country.
Golubev emerged onto the international tennis scene in 2010 at the age of 22 when he won eight straight matches, won his first ATP 500 tournament and reached a career high ranking of 33rd in the world on October 4, 2010.

“It was like a magic week,” Golubev recalled about the week he won the 2010 German Open in Hamburg. “I was playing well and I proved there that I can play well. I just have to find a way to play more consistently and win more consecutive games.” Golubev has played in all of the Grand Slam tournaments starting with the US Open in 2008 and has won three Challenger tournaments. Other career highlights include reaching the final of the St. Petersburg Open in Russia in 2008, the same year the Russian-born Kazakh citizen began playing for Kazakhstan.

Golubev was born in the Volgograd province of southern Russian before his family moved to Bra, Italy when he was 15. Five years later he moved to Kazakhstan and adopted Kazakh citizenship. He now styles himself the “Kaz from Bra.”

He began playing early, taking lessons at the age of six, and rising rapidly through the tennis ranks. “In the beginning, it was just a few practices a week, then it grew into a more serious phase. There was no moment that I thought about a professional career. It all came to me gradually with time. At the beginning, there were small practices, and then as I grew I trained more and added more practices. And the first results showed at local tournaments at first, and then at the regional level, and then even at an international level,” he told EdgeKz. He has been further helped by great Italian coach Massimo Puci, whom Golubev began working with at the age of 14 and who has stayed with the rising tennis star since his move to Kazakhstan.

“He feels like my big brother, and that’s important. He knows me very well on a personal level and that’s key,” he said. Golubev also credits Kazakhstan for ultimately helping him to break through on the international level. “Kazakhstan helped me to broaden my tennis potential,” he told EdgeKz. “This shows in the conditions of the practices for preparation for tournaments, as well as the results. Kazakhstan has great potential for tennis and this is being developed by the Kazakhstan Tennis Federation. These types of efforts are not often encountered anywhere else.”

As an international level tennis player and one who has lived in three countries, Golubev is at home in Kazakhstan’s multi-ethnic, multi-cultural society. And he says he believes Kazakh players will continue to emerge onto the elite professional tennis circuit. “The process (of preparing international-class level players) started recently in our country and I really hope that in the near future tennis will be at its best. And those young players that grow and have all the chances to break through are looking at the way we play. And I hope they take advantage of the resources for growth and will become elite players,” he said. “My advice to young players is simple. Set high goals for yourselves and do everything to achieve them!”