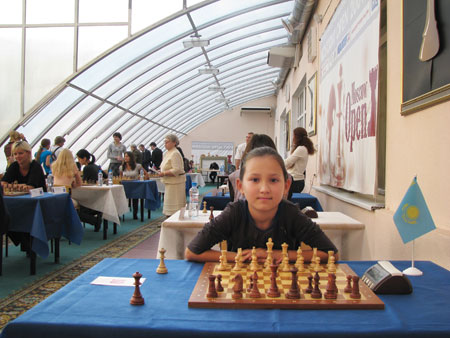 The ancient game of chess has traveled a bumpy road over the last few centuries. It has been beset by scandals, infected with politics and disrupted by the Cold War. It saw psychological warfare, the splitting of the international chess federation and, for the first time, humans challenging machines to prove that the human brain is still mightier than its creations. But throughout this turmoil, chess has remained a game of great significance in this part of the world. Out of 15 undisputed world champions, nine have been Russians or from former Soviet states. And since Kazakhstan is a former Soviet state, it inherited a strong chess culture and has since become one of the game’s powerhouse nations.

And now, a native Kazakh chess player – only 12 years old – is making world chess history. Her name is Zhansaya Abdumalik and the World Chess Federation is considering naming her the world’s youngest chess grandmaster in history.

Zhansaya is a shy, modest and polite girl. One would never guess that this young girl is considered one of the fiercest chess players in the world. “When she [Zhansaya] enters the room, everyone is intimidated by her and the only thing that everyone thinks about is how to beat her — not to win the gold or increase their rating points – but how to beat Zhansaya!” her mother Alma Ashirova told EdgeKz. 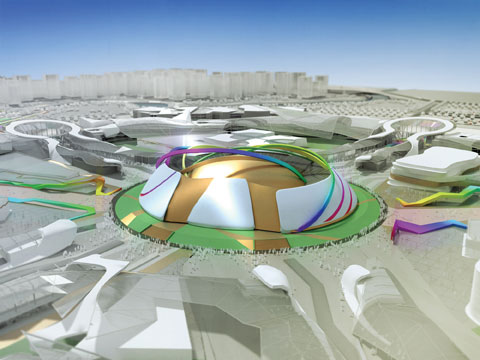 Fame Came in a Dream
The night Zhansaya was born, her father, Daniyar Ashirov, got a phone call from his father. He told Daniyar to name his daughter Zhansaya Abdumalik, giving her the same last name as the grandfather’s first name – Abdumalik – even though the family’s surname is Ashirov. Daniyar argued, bewildered as to why he was being asked to abandon the family’s surname. The grandfather explained that he had had a dream in which a white-dressed man said if he named his granddaughter Zhansaya Abdumalik, she would make his name world famous.

Daniyar listened to his father. And for years Daniyar and Zhansay’s mother Alma wondered what Zhansaya would do to make them all famous. It soon became clear. At the age of six, Zhansaya and her older brother began attending a chess school. In just over a year, Zhansaya won her first trophy at a national tournament in January 2007. “Dad, I will win the world tournament in one year,” she said to her father at the time.

“I can say that I was always stunned by her character. She is very confident, though she is young. She (once) had to face a European champion and before going to bed the night before, she said, ‘Dad, don’t worry, I will win!’ Everyone was worried! The coach was, we [her parents] were, but she always says – I will win. And she delivers on her promises,” Daniyar told EdgeKz.

And Zhansaya delivered on her world championship promise, winning the next year at the game’s major international tournament, toppling opponents from across Europe and Asia.

Even Champions Lose
But it hasn’t all been victories on her way to the top. Zhansaya lost in 2008 in Vietnam and it remains her only major competition loss to a weaker opponent. “She gave that one away,” remembered Alma. After the game, Zhansaya went up to her room in tears. She was worried about upsetting her parents. “We came from so far and everyone believed in me. I guess this responsibility made me really nervous and I lost,” Zhansaya explained to EdgeKz. 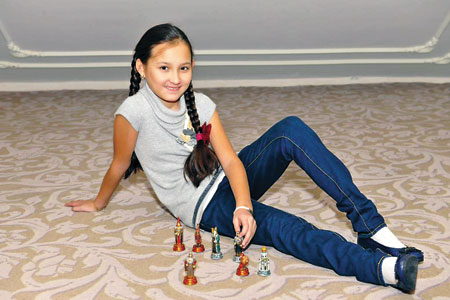 But by then Zhansaya’s skills were becoming well known, and the loss provoked an outpouring of support from her fans. “That day, Alma and I went on the Internet to check email and to our surprise we got so many nice words of support from our relatives and even strangers. Someone had even started a forum in support of our daughter. Absolute strangers believed in her. So I printed the comments and showed them to her. And this inspired her to then win 10 games in a row, and then she won the gold at the world tournament!” Daniyar explained.

“My dad always said, when I play the whole country is watching, and if I make a mistake, the whole country will know. I had to be always focused and play to the best of my ability. And my supporters are important to me, they give me confidence when I play, I don’t want to disappoint them,” said Zhansaya.

A New Iconic Figure
Zhansaya hasn’t lost a match since that 2008 defeat in Vietnam. She has now been crowned world champion among her peers four times in a row. She has played tournaments around the globe in Russia, Malaysia, China, Vietnam, India, Indonesia, Greece, Brazil and elsewhere. Her games last longer than most others in tournaments, each average up to five hours, and chess players do not want to cross her path. Often when other players see her name in major tournaments, they change their strategy to go for second place.

Zhansaya – who is currently living, training and studying with her mother in Singapore – has the support of 16 million fans in Kazakhstan and more around the globe. A Malaysian family even named their daughter after Zhansaya and asked to take a picture with her. She has also caught the attention of the coach of former world champion Gary Kasparov, Alexander Nikitin. “At first when he found out (about my skills), he was surprised and intrigued. But after playing me, he said, ‘Well done’,” Zhansaya told EdgeKz. And with the help of her sponsors and the government of Kazakhstan, Zhansaya and her family hope to achieve even bigger goals. “Our plan is to make it to the top 100 world rating, where there are no representatives from Kazakhstan. And also to become the world women’s champion,” said Daniyar. 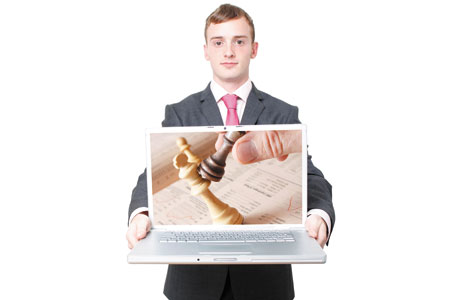 Despite the fame and pressure of being a chess prodigy, Zhansaya tries to remain an ordinary little girl. “I’ve made a lot of friends since I became the world champion, but I try to be polite and modest as my parents taught me,” she says.

Zhansaya Abdumalik and her family have embarked upon a unique journey, particularly for such a young person. And with just a few losses, it could all disappear and she could lose her world title. But through it all, she remains confident and content. “Don’t worry people, I will win!” remains her refrain.

Chess and International Intrigue
The new post-Cold War generation in Central Asia and the United States rarely give a thought to the tensions between the former Soviet Union and the West just a few decades ago. But those tensions once made world news as international politics played out on a chess table in 1972.

A chess match called the “Match of the Century” played in Iceland that year pitted the young US prodigy Bobby Fischer against Russian-born Boris Spassky. The match was fraught with tensions, complications and accusations. And to this day, some think the match also involved other competitors: the CIA and the KGB. First, Bobby Fischer complained about playing conditions after losing his first two games. After a few losses of his own, Spassky complained about his chair being wired and demanded to it replaced. Then he complained about being sabotaged by the match being in Iceland. Although playing the match in Iceland had been Spassky’s choice. Fischer had wanted to play in Belgrade, Yugoslavia – modern day Serbia. In the end, after all the tensions and intrigues, Bobby Fischer defeated Boris Spassky and ended the Soviet Union’s long chess world dominance. Fischer then became a chess hero to many and villain to others.

Man versus Machine
In 1996, as the computer revolution was in full swing, chess again made international news. IBM had built a computer, Deep Blue (IBM RS/6000SP), that it claimed could beat a human chess grandmaster. So a series of matches were set up between the machine and the undisputed world champion at the time, Russian Garry Kasparov. 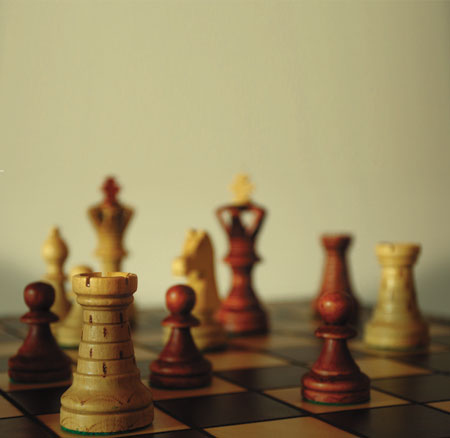 After much international hype and debate about the power of humans versus computers, the two set down to a series of six matches. Ultimately, Kasparov prevailed, winning three of six games, losing one and paying to a draw on two. After defeating the machine, Kasparov said he thought that Deep Blue was a new kind of intelligence that needed just a few more years to beat the human brain.
But it didn’t take that long. The very next year a re-match was scheduled with a retooled Deep Blue. Out of these six games, Deep Blue won two, lost only one and drew three. This was the first proof that a computer program could beat the human brain. But Kasparov expressed dissatisfaction that he didn’t have any of Deep Blue’s games to analyse, while Deep Blue had thousands of Kasparov’s games to study.

So in 2003, he again played against a machine, Deep Junior. That match ended in a draw and later that same year he faced a new 3D program, X3D Fritz. After the match, he admitted that he felt he had had a considerable advantage against this particular program, though he made a blunder which had cost him the win. Despite the four meetings between man and machine, the debate remains open as to the power of computers to match the creative, enterprise thinking that is – so far – unique to humans.
Garry Kasparov is thought to be one of the best chess players in the world to this day. He was an undisputed chess champion for 15 years, and in 1993 formed his own “Professional Chess Association.”

Zhansaya Abdumalik and her family are thankful to their supporters and fans around the world, naming particularly Alliance Bank, Anuar Nurpeisov, Kazakh British Technical University and Mr. Iskander Beisimbetov, Asset Magauov and Mr. Sun’ Sinyun’ of MangistauMunaiGas, KazTransGas, Ignatius Leong of the Singapore Chess Federation, her coach Alexander Nikitin, and the government of Kazakhstan.