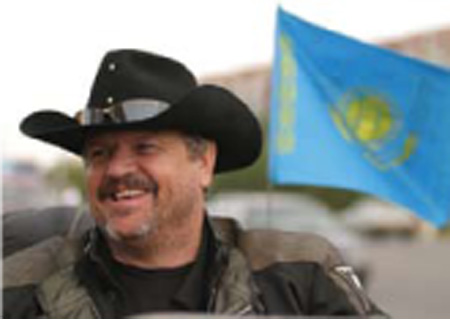 It’s impossible not to like Dmitry Petrukhin. The man is more than a personality – he’s a force of nature and a colorful unofficial ambassador for Kazakhstan who has forged new ties around the world for his country through his unique adventures.

To celebrate the 20th anniversary of Kazakhstan’s national independence, he organized a tour of Kazakhstan’s 20 largest cities by hundreds of bikers with rallies at each stop. He also launched a multi-year circumnavigation of the globe by a Kazakh yacht and handpicked the crew. Sailing around the world seemed an absurd fantasy for anyone from the world’s largest landlocked country. But the yacht is still sailing. 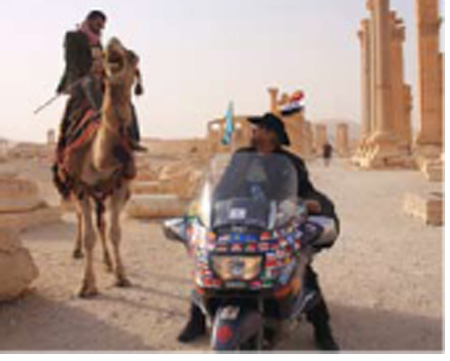 And Petrukhin hopes to begin in July an around-the-world motorcycle journey to further spread the culture of Kazakhstan to the furthest reaches of the planet.
Petrukhin, whose shaggy salt and pepper gray hair and tattooed arms present an imposing figure, was the popular host of the Terra Vita – Living World TV show. He is also the president and driving force behind the Central Asia Geographical Society and has been the president of the Kazakh Geographical Society.

He is also a highly successful businessman and respected public figure, a father and a husband. But above all, Petrukhin is a free spirit. “Freedom is an interesting topic,” Petrukhin told EdgeKz. “People often ask me what it means for me. In my view, freedom is the expression of a series of actions that we are free to choose and implement. And the concept of a ‘free man’ is very important and seldom-understood.”

“In general,” he continued, “the meaning of this expression lies somewhere very deep. In addition to personal freedom, the human individual needs to express freedom of movement, creativity, consciousness and will. In our time, we need to include the additional dimensions of economic and political freedom. All this makes it possible for people to select, plan, and thereby develop a sense of responsibility for their actions… I believe that this state is liberty,” Petrukhin said.

The 55-year-old Almaty resident added that he believes one must strive for balance in practicing freedom. “One of the oldest proverbs says that every person is born with two invisible

wings on their backs,” he told EdgeKz. “They are different. One wing helps the person soar upward; the other balances the individual where they are… so that they don’t fall lower.”

“But often it turns out that the majority of people are able to manage only one wing well in their lives. If that’s the wing that carries them upwards, then the person becomes divorced from the material world and becomes a hopeless dreamer,” Petrukhin said. “However, if they use only the wing that keeps them from falling, they never really took flight at all and they cannot soar above the vanities and petty issues of their lives.”

But Petrukhin is no empty philosopher. He practices what he preaches and his accomplishments have been recognized by Kazakh President Nursultan Nazarbayev who honored Petrukhin with the Altyn Adam, Patriot of the Country, award. Petrukhin has won it twice.

Despite his success, Petrukhin urges those who dream big to also reserve time for simple pleasures, “to relax, have a drink with friends, have fun, and take a walk in the open.”

“Don’t be afraid to dream,” he concludes. “But always remember: be responsible in your dreams. For dreams come true.”