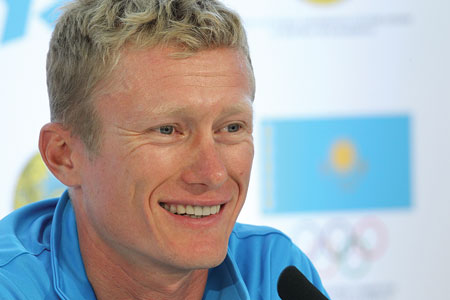 Kazakhstan athletes scored an unprecedented success in the country’s independent history at the London 2012 Olympics, placing the country 12th out of 205 countries that participated. They won a stunning seven gold, one silver and five bronze medals in cycling, weightlifting, triple jump, boxing, and both Greco-Roman freestyle wrestling. 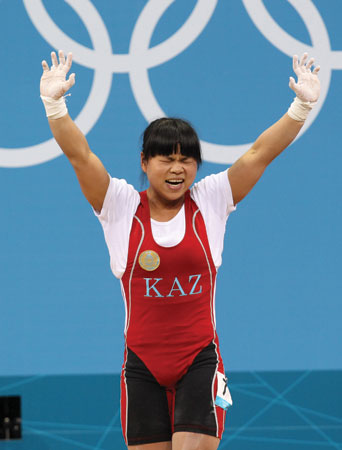 Kazakhstan was represented in the Games by 116 athletes competing in 25 sports. The flag bearer of the team was wrestler Nurmahan Tynaliev and President Nursultan Nazarbayev of Kazakhstan attended the opening ceremony.

The nation’s first gold medals were won by the famous cyclist Alexander Vinokurov in the 250 km men’s road race and by the young star of Kazakh weightlifting Zulfiya Chinshanlo. Vinokurov completed the 250 km distance on the first full day of the Games in a total time of five hours, 45 minutes and 57 seconds beating Colombia’s Rigoberto Uran Uran. His convincing victory demonstrated once more the high level of domestic cycling in Kazakhstan.Previously, Vinokurov’s top achievement was the silver medal, which he won in the Sydney Olympics 12 years ago. “It is a solid final achievement of my professional sports career. I could only dream of such an ending,” Vinokurov told a press conference after his victory.

On the second day of the Games, 19-year-old Chinshanlo won the second gold medal for Kazakhstan, setting both world and Olympic records in the women’s weightlifting 53 kilogram category with her 131 kg lift in the clean and jerk category. Previously, Chinshanlo had won two gold medals in the world championships and the silver medal at the Asian Games.

President Nazarbayev sent telegrams congratulating Vinokurov and Chinshanlo on their achievements. To Vinokurov, the president wrote, “Your determination and huge will 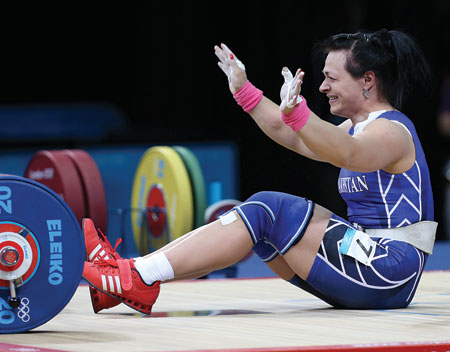 helped you advance through the race and defeat the most powerful competitors. You
gave a splendid gift to all Kazakhstan citizens and sports fans who were watching the race with much interest and excitement.” And to the young weightlifter, the president said, “You have not only won the medal of utmost honor and importance for every sportsman, you have also set a new world record and defeated the world’s strongest sportswomen. Once again you have showed the whole world your faultless skills and will to win. Kazakhstan is proud of you.”
Maiya Maneza, 26, also triumphed in the 63 kg weightlifting division. She lifted 135 kilograms – more than twice her own weight – in her first clean and jerk for a total weight of 245 kilograms. Maneza set a new Olympic
record, beating the previous one by three kilos.Stunning victories by Svetlana Podobedova and Ilya Ilyin in weightlifting and by Olga Rypakova in the women’s triple jump finalraised Kazakhstan to seventh place 10 days into the Olympics. On August 3, Podobedova, the 26-year-old weightlifter won a fourth gold medal for Kazakhstan. President Nazarbayev also sent Podobedova a telegram congratulating her on her victory. “Despite intense competition, you were able to proudly represent our country in the world games. The gold medal won by you serves as the indicator of the high quality, will and strength of your character. It is remarkable that from now on the title of Olympic Champion is among your sports achievements. I wish you the best of luck and new victories,” the presidential said.

Ilyin lifted 185 kilograms in snatch and 233 kilograms in clean and jerk. He also set a new world record in his category and became the first Kazakh athlete in history to become an Olympic champion twice. Ilyin won gold for the first time at the Beijing Olympics in 2008. He was world champion in 2005, 2006, and 2011 and was Asian Games champion in 2006 and 2011. “Setting the world 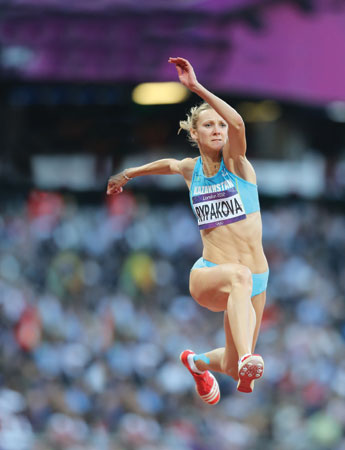 record and winning your second Olympics gold, you have proved that you keep your word and you

have always aimed at the highest sports result. At the competition you did not give a chance to your competitors – the strongest weightlifters of the world,” President Nazarbayev told Ilyin in another victory telegram.However, the biggest surprise of the Olympics’ early days was the victory of Olga Rypakova from Ust-Kamenogorsk in the triple jump. Rypakova won the sixth gold medal for Kazakhstan, taking the title with a third-round jump of 14.98 metres, her season’s best result. President Nazarbayev congratulated Rypakova on her achievement. “You have fully justified the hopes and expectations of the Kazakhstani people, demonstrating to everyone that our athletes are among the best in the world. Undoubtedly your victory will become a worthy example for many young athletes and will attract thousands of children to track and field,” the president said.

And on the last day of the Games, Serik Sapiyev became the seventh lucky gold winner for Kazakhstan, becoming the Olympic champion in boxing’s 69 kg light welterweight division and receiving the prestigious Val Barker Trophy for winning in style. In total, Kazakhstan won 13 medals and finished 12th in the medal count. Its achievement in winning seven gold medals was the best in the country’s Olympic history.