HomeNationalKazakhstan Celebrates 21st Anniversary With a...

Kazakhstan Celebrates 21st Anniversary With a New Generation of Visionaries 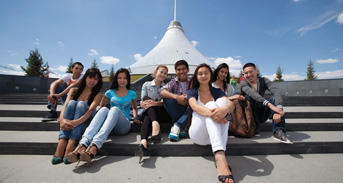 Half a millennium since the collapse of the Silk Road and only 21 years since regaining its independence from the Soviet Union, Kazakhstan has re-emerged as the thriving heart of Eurasia and the peaceful meeting point between East and West. And as the country celebrates its 21st anniversary as an independent nation – the traditional coming of age year in many cultures – a new generation of scientists, entrepreneurs and artists is emerging to lead in the next quarter century.
This new generation never had to experience firsthand the economic hardships, ecological catastrophes and horrific historical tragedies endured by their parents and grandparents. They grew up taking for granted a prosperous free-market economy, a stable political system and the concept of endless possibilities for their own lives. They have the confidence and optimism that comes with growing up in such a world, and are developing visions for the future that are as boundless as the Kazakh steppe.
Kulgaysha Berdykulova, from the southern Kazakhstan region, is an example of this new trend. It was once unheard of in rural Kazakh society for a young woman to run her own agricultural business, but this hasn’t stopped Berdykulova. She has successfully pioneered the introduction of North American standards of livestock care and management and blazed the way for others to follow her. In 2005, she received a microcredit loan worth 130,000 tenge under the government’s Rural Microcredit Program and has used it to significantly increase her number of breeding cattle. 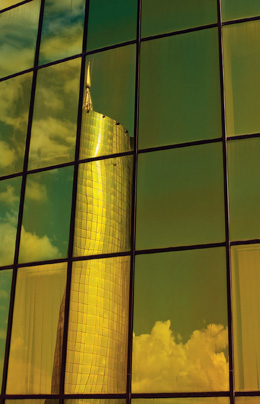 Zakhida Kozhakova, from the Almaty area, is another example of a young women breaking with tradition in what was once a male-dominated industry. Kozhakova used a commercial loan from the government to construct four greenhouses to grow crops of onions, lettuce and fennel. Not only did Kozhakova learn new ways to grow her crops, she sought out new markets around the country. Previously, farmers in her region rarely looked beyond local markets. But Kozhakova realized that the new roads and railway services built since independence gave her the chance to quickly and cheaply transport her crops to far-off markets. She quickly found demand for her vegetables in northern Kazakhstan. She was able to support her family and pay off her investment debts ahead of time. Now she is finding new ways to expand her business and finance her operation’s next phase of growth.
Kanat Tossekbayev is also one of Kazakhstan’s new generation of visionaries. Tossekbayev won a Bolashak Scholarship enabling him to study abroad after graduating from Kazakh National Medical University. He continued his training at Hanover Medical School in Germany and after returning to Kazakhstan, Tossekbayev successfully pioneered a new E-Ambulance program in Astana to improve the quality of pre-hospital medical aid. Thanks to him, ambulances are receiving modern equipment and GPS-navigation systems. And he has been instrumental in a Ministry of Healthcare project to bring medical accreditation levels to international standards. His team of doctors has won praise from international experts. “I feel it’s important to focus on improving the training of emergency doctors and to make sure they have the best equipment available,” Tossekbayev said. “They provide one of the most essential public services.” The young doctor expresses the commitment to others that is common in the new Kazakh generation. “I have always adhered to the principle that I should make something useful of myself,” he said. “That way, people can say, ‘He has lived a well-spent life’.” 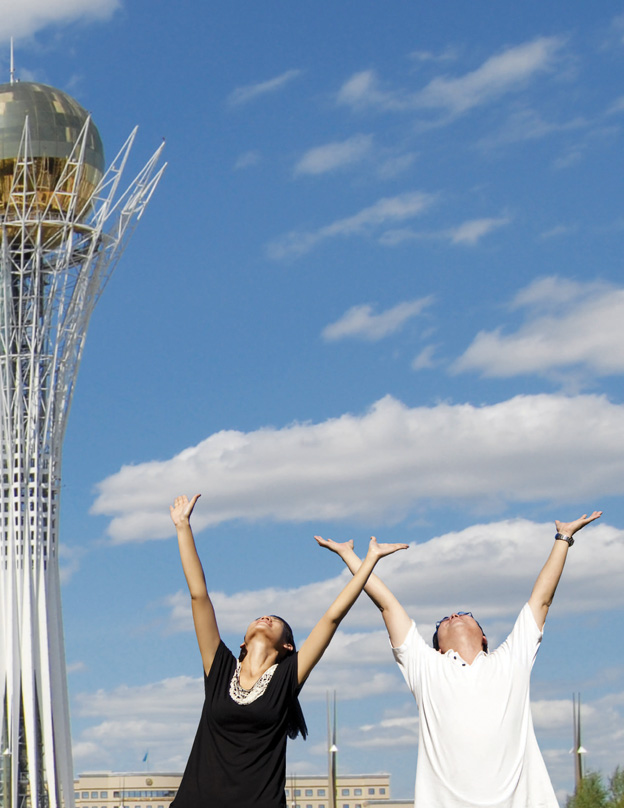 Kazakh President Nursultan Nazarbayev this year has repeatedly emphasized the importance of citizens developing personal commitments to their fellow Kazakhs and Kazakhstan’s development. And Aliya Zholboldina is an example of the kind of emerging young leader who is inspiring the next generation to play an active civic role in their country.
Zholboldina, 31, who has lived in both Astana and the United States, is already an experienced organizer who has promoted voluntary activities among the citizens of Astana. She has travelled widely in the West and in 2008 earned a Master’s Degree at the University of Pittsburgh’s School of Law in the United States. She has also appeared as a bright, articulate spokesperson on YouTube podcasts and communicates with friends and colleagues through Facebook. She even opened a Facebook page called Charitable Initiative: I Want to Help. “We’re going to use it to publish upcoming projects and people will be able to start contacting us for help and support,” she said. Zholboldina also helped launch a program to help prepare first-graders from orphanages and children in need for the new school year. “We’re already planning more ambitious and complex projects to follow it,” she said.
Zholboldina is typical of her generation in her combination of optimism and desire to make a difference. “I am confident that everyone is familiar and close to concepts such as being kind-hearted, compassionate and not remaining indifferent,” she said. “Everyone tries to care, or at least has an internal desire to care and provide assistance.”

In addition to Kazakhstan’s new generation of civic and business leaders, the country’s 21 years of independence have also brought a new wave of talented artistic creators. Arman Yakhin is one of Kazakhstan’s success stories in the field of international movie-making. He has made his name in the field of computer graphics, working on many major movie projects including “72 meters,””The Turkish Gambit,””Mongol,””The Admiral,” “Wanted,””The Inhabited Island” and “Vacations of Maximum Security.”At only 24 years of age, Yakhin now lives and works in Moscow where he runs MainRoad/Post Studio and directs its special effects division. He recently returned home to Kazakhstan to attend this year’s Shacken Zhuldyzdary Almaty International Festival.
Kazakhstan has attracted $150 billion in Foreign Direct Investment in the past 20 years, an significant achievement for a nation of only 16 million people. It is emerging as one of the world’s top five oil and gas producing countries and is already the number one uranium exporter in the world. And as the success of Berdykulova and Kozhakova indicate, the country is also emerging as a formidable global agricultural provider. The national KazAgro company has invested heavily in scientific research and training for the country’s farmers and in state-of-the-art agricultural machinery. As a result, Kazakhstan is now the world’s sixth largest food exporter.
Thanks to what is now two decades of that type of national commitment to creating a growing, prosperous society, a new generation of can-do achievers is emerging around the country to take advantage of the new opportunities and expertise that have opened for them. In the 21 years since independence, Kazakhstan has transformed. Like a sleeping princess in a fairy tale, she has awakened from hundreds of years of isolation and slumber to become a leader and example for the world. From agriculture to art and from medicine to social work, a new generation of young visionaries has picked up the banner and it is moving the country forward into a better future.