The two-day Nuclear Security Summit (NSS) in Seoul, South Korea on March 26-27 marked a significant step towards establishing more effective nuclear security across the globe.
Leaders from more than 50 nations attended the summit and agreed on a joint communiqué to cooperate on boosting international cooperation to ensure the safety of “vulnerable nuclear material.”

President Nursultan Nazarbayev of Kazakhstan told other government leaders at the summit that the world had taken great strides towards achieving global nuclear safety in the two years since the first Nuclear Security Summit was convened by U.S. President Barack Obama in Washington.

Nazarbayev said the first of these milestones was the Nuclear Non-Proliferation Treaty (NPT) Review Conference that was held at the United Nations in 2010.  “Second, in two years, the world eliminated a large amount of highly enriched uranium (HEU),” Nazarbayev continued. “More than thirty countries in the world have adopted national commitments to nuclear safety. Third, in 2010, Astana successfully hosted the Conference of the Global Initiative to Combat Nuclear Terrorism,” he said.

The president said Kazakhstan had also completed an unprecedented effort to transport 210 tonnes of spent nuclear fuel to safe storage. He also noted that Kazakhstan had joined the Group of Eight (G8) Global Partnership against the spread of weapons of mass destruction and it had ratified the 2005 Amendment to the Convention on the Physical Protection of Nuclear Material (CPPNM) to bring it into force by 2014.

Nazarbayev told the Seoul summit that nations should guarantee the safety of installations for the peaceful development of nuclear industry around the world on the basis of three principles: the adoption of legally binding nuclear safety standards, the establishment of mechanisms for rapid response in case of emergencies at nuclear facilities, and the granting to all states equal access to peaceful nuclear technology and supplies of low enriched uranium (LEU) through an International Nuclear Fuel Bank. Kazakhstan’s president also offered Astana as a venue to host one of the future nuclear security summits to review progress toward establishing international nuclear safety.

The two-day summit ended on a high note with the adoption of the Seoul Communiqué which set a target date of 2014 for bringing the amendment of the CPPNM into force. More nations, including Italy, also pledged to eliminate their stocks of fossil material. And the United States, France, Belgium, and the Netherlands concluded a new agreement to produce medical isotopes without the use of highly enriched uranium by 2015. This was in accord with the call in the Summit Communiqué for all nations with nuclear industries and facilities to reduce their use of highly enriched uranium as much as possible.

“It would not take much, just a handful or so of these materials, to kill hundreds of thousands of innocent people and that’s not an exaggeration, that’s the reality that we face,” President Obama warned the conference. “The security of the world depends on the actions that we take.”

The President of the United States also praised what he called President Nazarbayev’s “outstanding leadership” in ensuring the security of the huge amount of nuclear material that newly independent Kazakhstan inherited from the collapsing Soviet Union 20 years ago. “As the President of Kazakhstan indicated, this was a major site for nuclear operations during the Cold War.  There was a lot of loose nuclear material that was vulnerable to potential smugglers, to potential infiltration. And as a consequence of extraordinary cooperation between our three countries… we’ve been able to effectively lock down and secure all this vulnerable material,” Obama said at a joint media availability with President Nazarbayev and President Dimtry Medvedev of Russia.

“We have been able to do this in part because of the outstanding leadership of President Nazarbayev and the people of Kazakhstan,” the U.S. leader continued.  “We’ve also been able to do it because the United States and Russia over the last several years have shown ourselves to have a mutual interest in making sure that nuclear materials are secured and that they do not fall into the wrong hands.”

“This kind of multilateral cooperation is being duplicated as a consequence of this Nuclear Security Summit.  And it gives you a specific example of the kind of progress that we’re making,” Obama said.

Russian President Medvedev agreed with Obama that Kazakhstan’s work with both nations to secure nuclear material was “a good example of practical cooperation that should be highlighted,” the Russian leader said. “We managed to show this good example of cooperation, and such an example, I believe, should multiply, should be reproduced, and should also lead other countries to ensure nuclear security.” 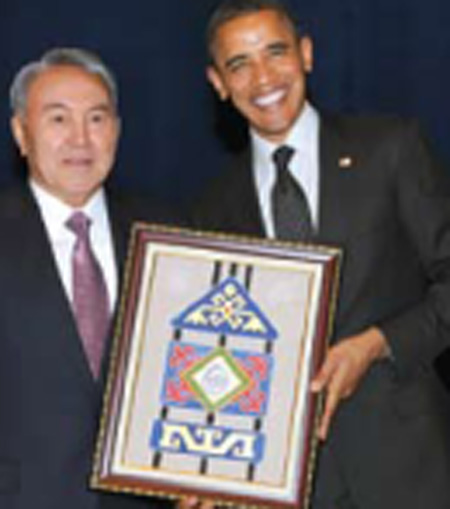 China’s President Hu Jintao urged world leaders attending the summit to create “an international environment conducive to boosting nuclear security.”
President Obama also noted that the issue of nuclear arms control “is extraordinarily complex, very technical, and the only way it gets done is if you can consult and build a strong basis of understanding both between countries as well as within countries.”

“Twenty years ago, Kazakhstan made a decision not to have nuclear weapons,” President Obama said. “And not only has that led to growth and prosperity in (President Nazarbayev’s) own country, but he has been a model in efforts around the world to eliminate nuclear materials that could fall into the wrong hands. So I very much appreciate his leadership.”
Responding to the U.S. leader, President Nazarbayev said he supported Obama’s call “to all nations to struggle for a nuclear-free world. “We fully support the nuclear strategy of the United States, and we say that all the countries that support the Non-Proliferation Treaty will get the support of nuclear powers and will never be threatened by any nuclear state. And I think this is very important,” Nazarbayev added.

The government of Kazakhstan has also launched a website called Nuclear Safe World at www.nuclearsafeworld.org.Thewebsite seeks to enlighten the international community about what it takes to create a more secure future and to encourage dialogue around the issue of nuclear safety.

The next Nuclear Security Summit will be held in the Netherlands in 2014.