HomeNationalHockey in Kazakhstan: Passion and Success

Hockey in Kazakhstan: Passion and Success

By Michael Jacobsen and Colin Berlyne 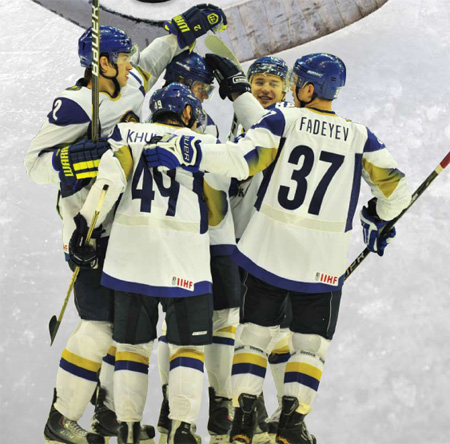 There’s something about being a huge, continental-sized country with long, cold winters that creates a passion for ice-hockey. It happened in Canada, the United States and Russia – and Kazakhstan is no exception.

“The kids see us and want to be like us,” professional hockey player and Kazakhstan National Team member Talgat Zhailauov, 26, told EdgeKz Magazine. “Hockey is one of the best games in the world.”

That passion will be on display in May 2012 when Kazakhstan’s national team will face some of the world’s toughest competition in the International Ice Hockey Federation (IIHF) World Championship May 4 through 20 in Finland and Sweden.

Fresh off the country’s dominance and ultimate triumph at the 2010 Asian Winter Games on its home ice in Kazakhstan, the Kazakh team has – for good or bad – been placed in one of the championship’s most elite brackets. They will have to face the likes of Canada, the United States and 2011 World Champion Finland if they hope to advance.

But the love for hockey runs deep in Kazakhstan and miracles do happen. “They are playing for each other,” Kazakhstan National Team Head Coach Andrey Shayanov told EdgeKz of Kazakhstan’s small, elite group of players. “It is like they are coming home with their play for the national team.”

It’s not surprising that Kazakhs have a passion for the game as Astana, the capital, is the second coldest capital in the world behind Ulaan-Baatar in Mongolia. So there’s plenty of time to practice and the country also has a long history of success. Among the first stars of Kazakhstan was Boris Alexandrov who won gold in February 1976 as a member of the Soviet team at the Winter Olympics at Innsbruck, Austria. In autumn 1976, he also played for the Soviet national team in the Canada Cup. 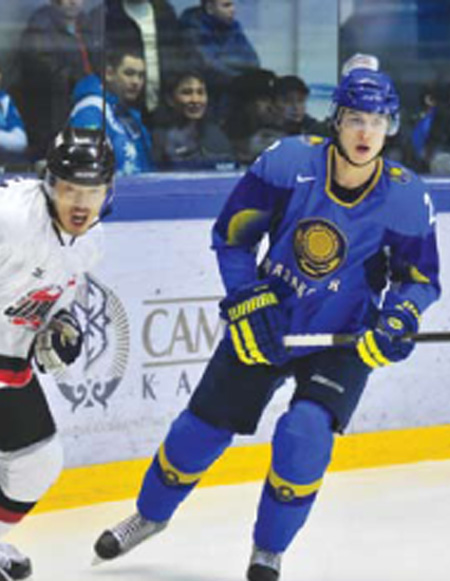 That success took a leap forward more recently when Kazakhstan gained national independence at the end of 1991. For the first time, Kazakhstan could field its own national team in the global arena. The new team debuted in April 1992 in the Grand Prix tournament held in St. Petersburg in Russia. The following month, the Ice Hockey Federation of Kazakhstan became a full member of the International Ice Hockey Federation (IIHC) and that August, the country held its first independent national championship.

International success soon followed. In January 1995, Kazakhstan won the Asian Cup, and the following year it won the Asian Games championship held in Harbin, China. In February 1995, the country’s student team won the World Student Games in the Spanish city of Jaca, beating Teams Czech Republic and Russia. Another high point came at the Winter Olympic Games in Nagano, Japan in 1998, when the national team reached the quarter finals – making them among the eight best teams in the world.

On March 6, 2001 the game in Kazakhstan also received a major boost when the new Kazakhstan Palace of Sports opened in Astana. And in spring 2003, Kazakhstan’s national team won a World Championship division in Budapest confirming its emergence as a team to be reckoned with in international competition. In January 2008, a Kazakh team took bronze at the Continental Cup in Europe and a Kazakh women’s team took third place in the Cup of European Champions.

In recent years, the game’s position in Kazakhstan was also strengthened with the launching of the Continental Hockey League across the former Soviet republics of Eurasia. In April 2009, the Kazakhstan national team accomplished a major feat when it won all its matches in the World Championship 1st Battalion division in Vilnius, Lithuania.

But one of its greatest and most recent triumphs came in 2011 at the 7th Winter Asian Games. The games were held in January and February in Astana and Almaty and the men’s team won the gold medal and the title of Asian Games champions. The women’s national team of Kazakhstan also won gold. Only two months later in April 2011, came more triumphs. At the World Championships (division I – group B), held in Kiyv, Ukraine, Kazakhstan’s men’s team won another gold medal and the right to return to the top division of the world championship.

All of that success has led to Kazakhstan being placed among the world’s elite teams for the May IIHF world championships. And it has strengthened the desire of the next generation of Kazakhs to play the game. “It’s developing,” said coach Shayanov, 43, who has been coaching for more than 20 years. “In the last few years they have been creating better facilities for kids.”

That wasn’t the case when national player Zhailauov was a kid. Growing up in east Kazakhstan, then under Soviet control, there weren’t many facilities available, so Zhailauov and his friends would spray water and try to create little ice hockey rinks in the street or wherever they could find.

When Zhailauov was eight years old, a friend asked him to join a school that had hockey facilities. Instantly, he knew the game was for him. “I liked the skating, I liked the speed, I liked the fighting,” he said, adding that he still likes to drop the gloves against other players on the ice. Just seven years after first picking up a stick, at the unusually young age of 15, he turned pro. And just two years after that, in 2003, he joined the national team.

The place where Zhailauov and the rest of the national team train now is no frozen puddle in the street. Entering the facility about 35 minutes outside of Astana that the hockey team shares with other national sports is like stepping into a luxury hotel. The lobby is filled with plush seats and flat screen televisions and it even has the ubiquitous hotel-like line of clocks behind the reception desk showing the time for cities around the world. The training complex itself is also impressive with a weight training area, Olympic-sized pool and other general fitness facilities in addition to the team’s ice hockey rink.

The increased development and focus on hockey has paid off. The country is now ranked 16 in the world and Kazakhstan’s Ice Hockey Federation lists 4,716 registered players, an impressive number for a country with a population of only 16.5 million. Some of its players have even made it to the renowned United States-based National Hockey League (NHL), including east Kazakhstan native Nik Antropov, who plays for the Winnipeg Jets.

But the pool of the country’s elite, world-class level players remains small, says National Team Coach Shayanov. And it will be a great challenge to beat the likes of Canada and world champs Finland. “The world championships are where you see the best players in the world,” said Shayanov. “And our program has been created to win.”