Getting Wet: Watersports in the World’s Largest Landlocked Country 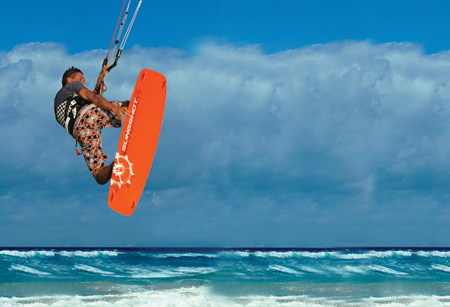 Kazakhstan is known for many things. It has a vast ancient steppe that stretches nearly the size of Western Europe. It has a new capital designed by the world’s greatest architects. It is also the world’s ninth largest country and the planet’s biggest landlocked nation.

What it is not known for, however, – and logically so – is water sports. But this vast ancient land is filled with rivers and lakes and wind and a community of diehard water sports fans who have found a way to enjoy the water in a location as far from the ocean as you can get.

There’s a spot on the Kapchagai Reservoir where the wind starts blowing at 6 a.m., reaching 18 meters per second. By noon, this steppe wind raises waves two and three meters high. Artyom and Denis Chibisov, brothers from the Kapchagai area who have been coming to this spot for years, will tell you that this is one of the most popular spots among Kazakhstan’s growing number of windsurfing fans.

Kapchagai is a big place. The Ili River pours into the Kapchagai Gorge, where a dam subdues it and creates huge Kapchagai Lake, stretching about 100 kilometers long and 25 kilometers across. Shallow sections and nearby resort pools are enough for most visitors from Almaty, 70 kilometers away. But for the new generation of water sports fans, it’s the lake’s wind and waves that keep them coming back. “It’s just you, a sail, a board, and nature—one on one!” the brothers told EdgeKz.
The brothers have travelled as far away as Egypt to windsurf, have participated in international competitions, and even won awards. They’re big promoters of the windsurfing scene in Kazakhstan and of Kapchagai’s planned new windsurfing station, which will offer equipment and coaches. But windsurfing in Kazakhstan isn’t all new school. Windsurfer Alexander Voronin also got his start at Kapchagai. He’s been windsurfing since before anyone in Kazakhstan knew what it was. “In the 1980s… not many people knew about it. The equipment was completely different than it is today. The boards were big and heavy. The sails were delicate and often broke.” Eventually he took matters into his own hands and opened a shop to sell the equipment he wanted. 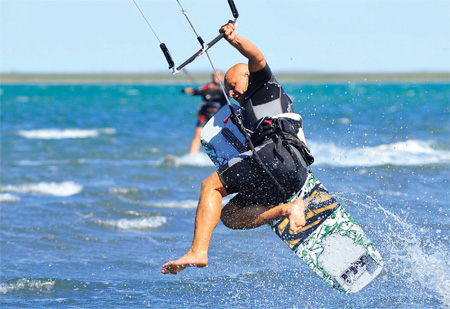 Today, it’s Alexander’s company Alex Grand KZ (www.alexgrand.kz) that will open the windsurfing station in Kapchagai. “We are totally sure windsurfing in Kazakhstan will get more popular every year,” he told EdgeKz.

Aleksey Lichman is a 39-year-old skier who says he was lost without some intense, nature-based activity to keep him going from snow to snow. That is until someone told him to try windsurfing. “Despite numerous falls and a lot of water consumed, I liked it,” he said. So he continued, despite a lack of training and equipment. “It’s a good way for me to get my dose of adrenaline.”
In addition to Kapchagai, many of Kazakhstan’s other lakes offer the key elements of windsurfing: water, wind and beautiful scenery. Balkash Lake, Bartogai Reservoir and Alakol Lake all draw their share of windsurf junkies. Balkash is Lichman’s favorite. “It is quite large, and the wind and nature make nice, dynamic scenery… The thermal wind blows from noon to sunset, plus other winds that come from air traffic and weather changes.”

Between the Sea and the Sky: Kite Surfing

Kite surfing is an extremely young sport and has been practiced in Kazakhstan for only about a decade. This challenging sport, however, already has hardcore fans here willing to import equipment and wait for wind in order to kite surf in some of the country’s most stunning natural settings. 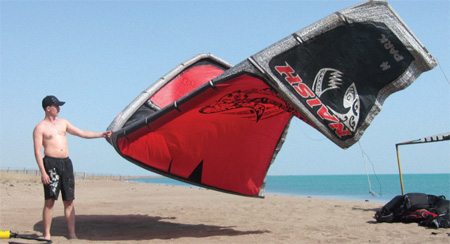 Darina Shpachenko, a 30-year-old from Almaty, was one of Kazakhstan’s earlier kite surfers. She started by riding with other kite surfers and went on to take classes with an instructor. She encourages beginners to start out surfing with more experienced kite surfers. Luckily, beginners can find kite surfing groups in Almaty, Kokshetau, Ust Kamenogorsk, and Karaganda, and individual kite surfers around the country. Around Almaty, most kite surfers travel to the Kapchagai Reservoir or Balkash Lake to practice their sport. The wind at Balkash is generally present and steady, though there are also calm days. Shpachenko says that even though “it hurts to travel 300-400 kilometers only to find total calm,” the trips are stunning when the steppe is blossoming.
But it’s the Caspian Sea that really beckons. The wind is almost always blowing there, luring kite surfers like seven-year kite surfing veteran Ruslan Amelchenko, 40, from Almaty, who just want to “move in the wind”. “People on the beach come running to see the colorful show” when the wind kicks up and the kites take flight, he told EdgeKz.

Kite surfing can be difficult – “I still have scars from my first year,” 28-year-old kite surfer and instructor Dmitriy Martyn told EdgeKz. But the main obstacles are finding and affording equipment, and waiting for the wind. Kite surfers in Kazakhstan use a variety of different boards throughout the year, changing with the season and the wind. But the kite surfing community in Kazakhstan is a passionate one. “There’s a pond or artificial lake in or close to every major city in Kazakhstan. Looking on a map, you won’t see one near my city, but in reality, I have four options every day I decide to go out,” says Martyn, who lives in Karaganda. Instructors train students on small ponds and graduate later to bigger reservoirs and finally to Kazakhstan’s major kite surfing destination – hidden spots along the Caspian Sea. Like the prime windsurfing destinations, some of these places can be remote – which is just fine with Kazakhstan’s kite surfing community. “That’s why they’re still a paradise,” says Martyn.
It’s that love of the beauty of nature that attracts many to the sport in some of Kazakhstan’s most beautiful locations. “I love kite surfing because you feel you’ve tamed the power of nature,” Martyn says.

Like windsurfing, kite surfing enthusiasts here expect the sport to grow. But, they say, in a country the size of Kazakhstan, there will always be plenty of beautiful, uncrowded spots to practice their sport.

“There’s nothing like the feeling of cold water as it covers your head,” says Inna Yurchenko, 13, from Oskemen, who has been practicing the sport of canoe slalom for two years. “I like navigating boats, but sometimes it seems like it’s the river who navigates. We fight to see who is in control, me or the river.”

Whitewater slalom involves guiding a canoe or kayak through river rapids while navigating turns and passing through a series of gates. The sport is less than a decade old in Kazakhstan, but its following is growing. Right now, it is based in Ridder and Ust Kamenogorsk. “The place where we practice is a little, wild nature corner on the Ulba River,” says teenager Valery Shirokov, also from Oskemen, who started the sport at the age of ten. “Sometimes it’s scary, but slalom is not as extreme as it may seem. 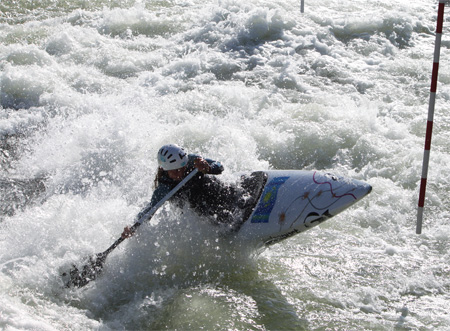 ”
But whitewater in Kazakhstan isn’t all about competition. There are plenty of spots for recreational paddlers. Whitewater rafting, canoeing, and kayaking are some of Kazakhstan’s most popular adventure sports and one of the best ways to get a close look at some of the country’s diverse terrain. Whitewater paddling has been around in Kazakhstan for a long time so there are plenty of guides that rent visitors equipment and show them where to go. There are rivers that run through forests, deserts, and deep canyons; you can even visit petroglyph sites while on paddling trips and the Almaty region has multiple major river systems. The deep, calm Ili River is perfect for beginners, while the Chilik is for skilled paddlers. The wide Turgen River is a major rafting site, with stretches for absolute beginners as well as those who want more white with their water.

So Kazakhstan may be known for its vast grassy steppe and cutting-edge capital, but for a growing number of locals and visitors in the know, the world’s largest landlocked country is also a wonder of water sports.

Get Your Gear On

Travel and tour organizations can also sometimes provide gear or help you transport your own. With the planned opening of a windsurfing station on Kapchagai Reservoir, there will also soon be more options nearby the country’s business center.
Kayakers, canoers, and rafters have it a bit easier. Tour companies like Asia Discovery (http://www.asia-discovery.nursat.kz/), KayakUSSR (www.kayakussr.com), Trekking Club (www.trekkingclub.kz), and other local companies can arrange trips. The Ecotourism Information Resource Center (http://www.eco-tourism.kz/) can also help you find local resources.

For Every Sport There is a Season

The best seasons for these water sports are from the spring to the fall. Obviously, the most appealing time to chuck oneself in a river or the sea is in the hot summer months. Sports that depend on wind, however, are probably best practiced in the gustier spring and fall.