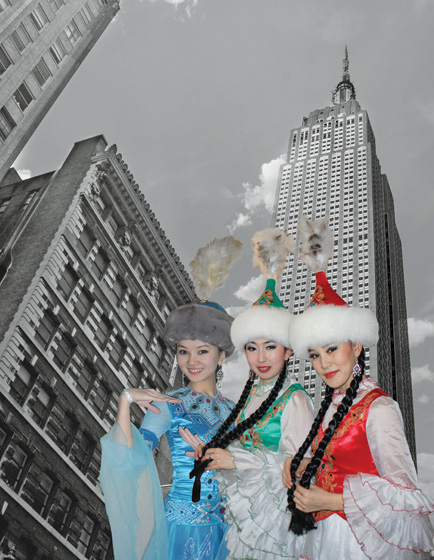 If there is a cultural capital of the world, New York City is as close as it gets – and for music, dance and entertainment, Carnegie Hall is its greatest temple.

So when the Kulansaz Folk Ensemble of Kazakhstan concluded its performance with a standing ovation from the audience at Carnegie Hall last year, they knew their presentation of the rich and ancient heritage of the Kazakh people had taken Manhattan by storm.

“We put on display the national culture of Kazakhstan. The performances we chose expressed the inner feelings of our people. And the American audiences responded very warmly to all of them,” Ensemble Musical Director Marat Zhalbirov told EdgeKz.
The Kulansaz ensemble’s tour was organized by the Embassy of Kazakhstan in the United States as part of an overall program to present and promote Kazakhstan’s cultural heritage to the American people.

It proved to be one of the most successful projects the 33-year-old ensemble has undertaken. Founded in 1979 by the great Kazakh composer Aset Beyseuov, and relaunched in 2010 under the artistic direction of Yerzhan Kosbarmakov and the musical direction of Ensemble Musical Director Marat Zhalbirov, the Kulansaz Ensemble today is comprised of student graduates of the Kurmangazy National Conservatory and the Zhurgenov National Academy of Arts in Kazakhstan.

The repertoire of the ensemble covers the entire musical heritage of the Kazakh peoples. It includes folkloric music pieces, folk songs written by professional folk music composers and contemporary compositions and dances. Members of the ensemble play a vast variety of string, wind, and percussion instruments, including the dombra, sherter, bass dombra, zhetygen, adyrna, shinkildek, kobyz, kylkobyz, narkobyz and sazgen among others.

During the ensemble’s American tour, reviewers commented on the combination of excellent performances, colorful costumes, and traditional dances. The Carnegie Hall performance was the greatest triumph of a coast-to-coast tour filled with them. The young Kazakh musicians, dancers and artists performed before mass and elite audiences in New York, Washington and Los Angeles – and received rapturous applause and rave reviews. “The American people welcomed our national culture, our original instruments, costumes and original music,” said Ensemble Musical Director Marat Zhalbirov.

The tour was so successful that its outcome now seems preordained. But that was not the case in advance. “America, after all, is a very big country. So we were a bit worried how people would accept us,” Folk Ensemble Director Daniyar Skakov told EdgeKz.
As it turned out, he needn’t have worried. Organizers of the trip and its talented young performers all agree the tour was a great success and filled with unexpected surprises. “It was my first visit to the United States and I must say I was surprised that people knew so much about our country,” Skakov told EdgeKz. “Everything about the tour was great. We saw everything that was worth seeing in the great cities we visited and we were very glad to be given the privilege of being invited to perform in all of them… I would love to come back again and have our artists perform in many other American cities.”

Skakov’s favorable impression of America and the impact of the ensemble is shared by his fellow performing artists. “During our stay in America we were greeted with warmth from people. The people were really friendly,” said ballerina Nargiz Otrova. “We performed in New York, Washington, Los Angeles, the audience was very positive… The audiences appreciated us.”

Another pleasant surprise for the young performers was meeting the many Kazakhs who live in the United States and who came out for the ensemble’s concerts. “Many Kazakh-Americans came to see our performances. We had the opportunity to talk to them after our performance, and we were very glad to see them,” Nargiz told EdgeKz. “We got standing ovations wherever we played. They stood up everywhere to applaud us. It was great! That was when we knew we’d really done well.”

Young dancer Gulnara Shirinbekova said she was surprised by how strongly the audiences responded. “They approached us to talk to us and to take pictures,” she said. Though the ensemble traveled coast-to-coast, Shirinbekova said she felt the greatest connection to the audience in Washington, DC. “People there were more perceptive. And it seems as if they listened and saw their own folk dances, music and songs when we performed,” she told EdgeKz. 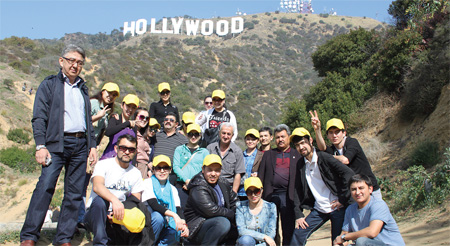 Shirinbekova found the whole experience of the tour one of the most positive and inspiring of her young career. “These memories are really warm and generous,” she said. “Upon returning to my country, I still thought that I was in America among Americans.”

The tour wasn’t all perfect performances, however. As with any ambitious artistic undertaking, there were many challenges and crises to be surmounted to make sure everything looked perfect in public, Skakov said. “We had professional gaffes, but only we know about them, of course,” he told EdgeKz. “But I must say, overall, the concerts were good. I was very pleased with the way it all turned out.”

The Kulansaz Folk Ensemble over its long history has proven to be an asset in preserving the musical and artistic achievements of the Kazakh people, both old and new. And it is now proving to be a superb cultural ambassador for Kazakhstan in bringing those cultural treasures to the attention of the wider world. 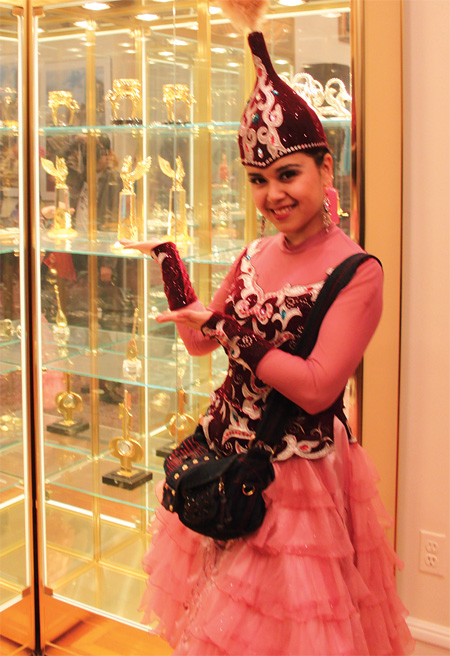 Gulnara Shirinbekova had no idea what she was going to find in America during a recent tour by the Kulansaz Folk Ensemble of Kazakhstan. But the young dancer found that America’s appreciation for Kazakh culture matched equally her newfound affection for the United States.

The 22-year-old dancer from Taldy Korgan in the Almaty region found appreciative audiences applauding her and her friends during the ensemble’s recent coast-to-coast American tour. But it was the vast scale of America and the generosity of its people that most impressed her. “You know, I noticed that Americans always smile… I liked them a lot. Americans are very different from Kazakhs. Kazakhs are very hospitable people, but Americans are very friendly,” she told EdgeKz. “It was my first visit to the United States… As soon as I got home, the very first words I said to everyone I met was that I wanted to go back.”
The tour is the most recent success in Gulnara’s lifelong desire to be an entertainer. “I studied in the National Stage and Circus College,” she told EdgeKz. “Upon graduation, I was invited to work for the Astana Philharmonic Orchestra, but since Astana is too far away from my home town, I turned it down. That left me still looking for a job. Then later I got a call from the Kulansaz National Ensemble and they asked me to perform at one of their concerts. I agreed and after that trial, I was offered a full-time job.”

Gulnara’s ambition was strongly supported by her family. And she says her mother is thrilled with her recent success. “The best support I had was the encouragement that came from my mom because she sent me to study in this field. And now she is very happy for me. Every time she sees me on TV, she is happy.”

But being a member of the ensemble isn’t easy. The Ensemble’s American tour included a 3,000-mile schedule. But Gulnara didn’t mind. “We performed in New York, and then went on to Washington and finally got to the magnificent Los Angeles. I fell in love with it,” she said.

Having covered such a wide swath of America, Gulnara was happy to find United States celebrates the religious and ethnic diversity of its people just as Kazakhstan does. “I was surprised that in such a country I saw a Madrasah for teaching Muslims. Since I am a Muslim, I didn’t think that in America in the wide open there would be a Muslim school. It made me think that Americans have a good soul, to accept all religions in the country. And I am thankful to them for that,” she said.

Gulnara says her eventual goal is “to become a national artist of Kazakhstan. I want to be one of the best dancers in the world. But in the next few years, I would like to go abroad to study and get an education from teachers in different countries.” And after the Ensemble’s recent tour, America is likely to be first on the list. “I would love to visit Los Angeles once more and to swim in the Pacific Ocean!”

Young ballerina Nargiz Otrova had to leave her husband and baby at home half a world away in Kazakhstan when she toured the United States recently with the Kulansaz Folk Ensemble. But like many of the Ensemble’s young performers, Nargiz feels privileged to have the opportunity to perform with one of Kazakhstan’s most prestigious cultural groups.

“This ensemble is where I found the choreographer I needed to advance my skills and where I received the further education to teach dance and ballet,” the 25-year-old from Kogaly in the Almaty region told EdgeKz. “This is where I learned to develop and grow as an artist and as an educator.” Nargiz was invited to apply to join the ensemble by one of her friends who had worked with the troupe. “I was accepted by the ballet master who is the director of the ensemble.

“I was requested to dance, and the directors checked my flexibility and my artistry on stage. But even after they accepted me into the team, they emphasized the importance of friendliness, team work and communicating well with my teammates.”

Though Nargiz has already achieved great success with the ensemble, she feels she is just starting her career as a dancer. “I want to be better than now. I am determined to achieve goals that I can’t reveal now. When I achieve them, then I will reveal them,” she said. The young mother also told EdgeKz that her tour in the United States with the ensemble was worth the pain of leaving her family. “It was my first time in the United States and I was really glad to have the privilege to see this amazing country… Washington amazed me with its cleanliness and the clear, classical and simple design of its buildings.”

Nargiz also found the American people to be more generous and welcoming than she had expected. “Their good spirit was remarkable. It seemed to shine out of everyone we met,” she said. “I had heard the complete opposite about Americans. But I changed my opinion because I met with them myself.”

Nargiz’s talents and work ethic have allowed her to inspire audiences halfway around the world from her native country. And though Nargiz was happy to return to her husband and child after the tour, she says she would not trade the success and experiences she has had as part of a unique aspect of Kazakhstan culture.