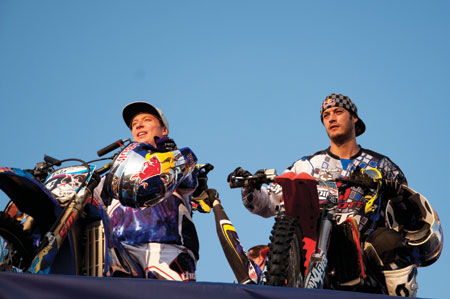 Strolling through Astana’s streets, you’d expect to see great architecture, a mix of cultures and lots of women in very high-heeled shoes. What you wouldn’t expect to see are motorcycles soaring through the air topped by the world’s best freestyle motocross riders. But that’s exactly what happened this summer when four of the planet’s most accomplished stunt riders converged on a square in the nation’s capital for the Red Bull X-Fighters Jam 2012.

Freestyle motocross is a modern take on the old sport of motocross and motorcycle jumping. Freestyle motocross riders compete by completing two routines in which they try to impress judges with the highest, most difficult and most innovative tricks. But this is definitely not old-school riding. Today’s maneuverable bikes allow riders to regularly jump 60 feet or more, do backflips and soar multiple stories above the ground. And the Red Bull X-Fighters series is among the sport’s most prestigious events. 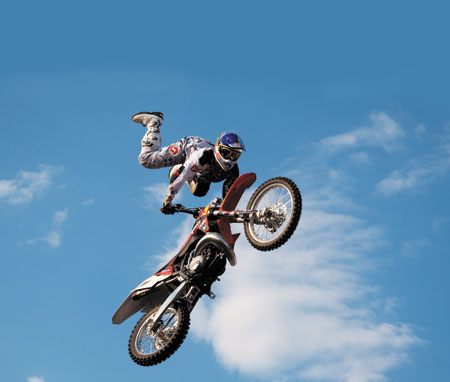 For this year’s event in Astana, New Zealand Rider Nick Franklin, Russian riders Alexey Kolesnikov and Alexei Aisin, as well as Kyrgyz champion Kirill Gavrilov showed up to show off their skills. A temporary freestyle motocross venue was built in the main square of Astana’s old town section and the city turned out to watch. In addition to the motocross event, which was staged in four heats, the crowd was also entertained between heats by acrobats and traditional Kazakh games and skills performed by the equestrian team Nomad.

The motocross riders performed such tricks as the “Superman”, in which they rise completely out of their seats and lay horizontal to their motorcycles while flying through the air, and the “Dead Man”, in which riders lie on the seat of the motorcycle and straighten their legs over their handlebars at 40 km per hour. Another of the event’s more difficult tricks was a stunt called the “climber” which requires riders to completely separate themselves from their motorcycles in mid-air and control their flight with only their toes touching the handlebars.

This is not the first time the world’s elite freestyle motocross riders have converged on Kazakhstan. A similar event was held in 2008 in Almaty, and Almaty also hosted the riders in a similar display this year. After the Astana event, rider Nick Franklin said he was pleased with the energy of the spectators and the vibe of the capital.