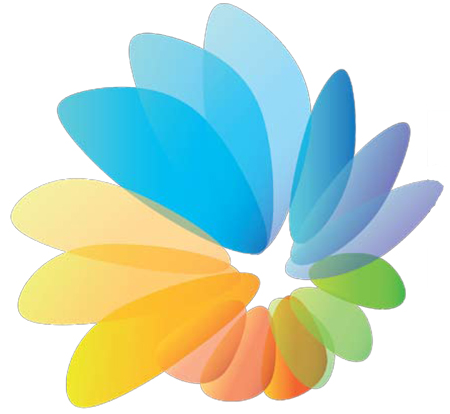 If you were a relatively new country open for business with lots to offer but not well known to most of the world, would you want roughly 5 million people to stop by for a visit? Of course.
And that’s why Kazakhstan is now on the tail end of an international, multi-year effort to host EXPO 2017, otherwise known as the 2017 International Specialized Exhibition, in its capital city Astana.

The tradition of World’s Fairs began in Paris in 1844 with an event called the French Industrial Exposition. Its success quickly sparked more such fairs across Europe and the United Kingdom. And the events soon became the way countries introduced their latest and greatest in the realms of culture, commerce and industrial development. Over the last century and a half, some of these multi-month events have even come to be associated with the introduction of significant steps forward in human achievement.

Such World’s Fairs are held every five years, with the next event to be held in 2015 in Milano, Italy. Similar to these fairs are specialized expositions. These are also held every five years, but are devoted to specific subjects. The next such event will be EXPO 2012 in Yeosu, South Korea on the subject of “Living Ocean and Coast”. EXPO 2017 will be one of those specialized events. Its topic has not yet been determined.

Both styles of expos have traditionally attracted millions of visitors. EXPO 2010 in Shanghai, China attracted a record-breaking 73 million people over 184 days. It is for that reason that Kazakhstan, an emerging business, energy and culture hub in the heart of Eurasia, is hoping to land the 2017 event. “If EXPO 2017 is held in Kazakhstan, it will leave a great cultural heritage for the people of the country and will be financially beneficial for the state. The EXPO will enhance the credibility of the country and put it on the same level with developed nations,” said Juan Correas, Kazakhstan’s general consultant on EXPO 2017.

Hosting the expo would also boost what has already been a successful, but short history of the independent country. Kazakhstan gained independence from the Soviet Union in late 1991 and has since attracted more than $150 billion dollars in foreign direct investment, has remained one of the most politically and socially stable countries in the region and continues its tradition of tolerance and interaction between its dozens of religions and ethnicities. One challenge still facing the country, however, is that not many people know about these successes. Bringing millions of new visitors to Kazakhstan for an exhibition would certainly help change that.

EXPO 2017 “should become a true adventure for guests, representing the cultural, political and economic life of Kazakhstan and other countries,” said Rapil Zhoshybayev, the Kazakh Foreign Ministry’s executive secretary and EXPO 2017 national coordinator. “New discoveries and a huge amount of positive emotions – this is the impression people should get after visiting the exhibition. And EXPO 2017 in Astana should be filled with this type of atmosphere. We have every intention to create it.” 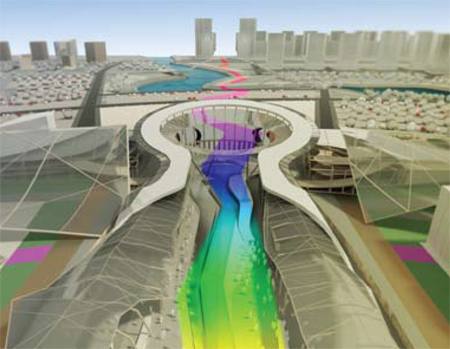 But Kazakhstan’s bid to host the event is not just wishful thinking. There are solid reasons that Kazakhstan, given its geopolitical position and relationships in the heart of Eurasia and its role as an emerging international energy source, would be a logical place to host the EXPO. “First of all, it is the first time in its history that an exhibition will come to Central Asia and the entire post-Soviet space,” said Aydar Kazybayev, chairman of the Bidding Committee and chairman of the Trade Committee of the Ministry of Economic Development and Trade. “Second, our country is a perfect place for the EXPO as it is located in the heart of the region, being a bridge between Europe and Asia, and we have historically maintained commercial, cultural and human contacts with both regions.”

Kazakhstan would also like to focus the subject of EXPO 2017 on energy and would be an ideal location for an energy-focused expo because it is emerging as a major energy supplier and has made significant advances in the development of both traditional and alternative energy. Kazakhstan has become the world’s primary uranium producer, it is the home to the largest oil find in the last 30 years and it is among the world’s top 20 natural gas producers. Kazakhstan also plans to create an international database on new energy sources to allow nations to demonstrate their achievements in this field should Astana host EXPO 2017.

It is also moving forward aggressively to develop alternative energy sources and is planning to invest more than $7.5 billion dollars in alternative energy development by 2015. For all of these reasons, the country has put forth its bid to host the event under the banner, “Energy of the Future”.

In 2011, Kazakhstan’s Minister for Economic Integration Zhanar Aitzhanova told the Bureau International des Expositions (BIE) General Assembly – the body that decides who hosts the event – that  Kazakhstan viewed the EXPO as a perfect opportunity to promote international dialogue on ensuring energy and environmental security, stability, and prosperity on a world scale.  Kazakhstan’s efforts to land the EXPO have been comprehensive and international, reaching all the way to the president’s office. In 2011, President Nursultan Nazarbayev told the 38th session of the Council of the Ministers of Foreign Affairs of the Organisation of Islamic Cooperation (OIC) that he hoped the 57 OIC member states would support Astana’s bid to host the EXPO. And, in addition to making its formal case to the BIE General Assembly late last year, Kazakh diplomats have also been lobbying officials in countries such as Germany, the United Arab Emirates, Brazil, India, Australia and South Africa on behalf of Astana’s bid.

Kazakhstan also highlighted its EXPO efforts through its pavilion during the 2011 20th Anniversary of the Commonwealth of Independent States and has lobbied for the event during major international conferences such as the Astana Economic Forum, the Annual Meeting of the European Bank for Reconstruction and Development, the World Islamic Economic Forum and the European Future Energy Forum. 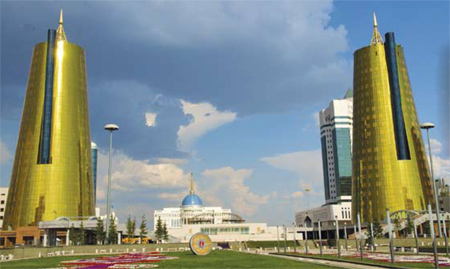 One of the most significant steps in the country’s efforts to land the event over its only rival – the Belgian city of Liege – came in March with a six-day visit to Astana by the expert commission of the Bureau International des Expositions. The commission delegation included such dignitaries as BIE Expert Commission Chairman Steen Christensen, BIE President Ferdinand Nagy, BIE Secretary General Vicente Gonzalez Loscertales as well as officials from Spain, France and Japan. The delegation was greeted by President Nazarbayev at the presidential palace and met with high-level Kazakh officials, such as Prime Minister Karim Massimov and Majilis (lower house of the Parliament) Chairman Nurlan Nigmatulin.  The delegation also got a glimpse of the broad support for the EXPO among Kazakh citizens when it was presented with the efforts of more than 2,000 Kazakh youth who expressed their support in paintings and artistic renderings. The renderings were presented during a ceremony at Astana’s new shopping and entertainment complex, Khan Shatyr. The traditional dance “Kara Zhorga” was also performed for the commission delegates.

The decision on who will host the 2017 event won’t come until November 2012 after the commission has presented its findings to the BIE’s more than 150 member countries, but BIE Secretary General Vicente Gonzalez Loscertales mentioned during the March visit that Kazakhstan’s bid has some attractive elements. “Kazakhstan has an advantage for holding EXPO 2017, since it is the first country from the Central Asian region ever to submit its application,” Loscertales said. 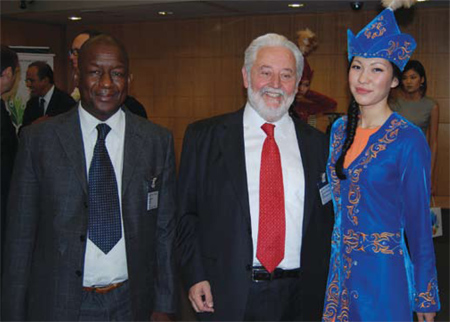 The Secretary General also emphasized that Kazakhstan has a successful 20-year history of independence, which can be considered an additional advantage. “Kazakhstan has very good relations with many countries. It is seen in the international community as a peaceful country that stands apart from conflicts in the West and the East and that is why we consider this would play a significant role in the decision making,” the Secretary General continued.

One other symbolic reason bolstering Astana’s bid is that in 2017 the city, which has become known internationally for its rapid growth and unique architecture, will celebrate the 20th anniversary as Kazakhstan’s new capital. “I think it is important to hold exhibitions in such regions, which are dynamic and play a significant peacekeeping role; the role of integration between different cultures, religions and political systems,” he concluded.

So with the bid in place and a continued lobbying effort underway, Kazakhstan is hopeful that millions of new visitors will soon learn more about this dynamic and emerging nation.