HomeNationalDombra: Part of the Kazakh Soul

Dombra: Part of the Kazakh Soul 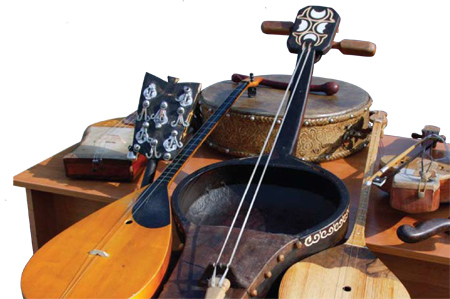 Across the vast Asian steppe and through the centuries, the sounds of a simple stringed instrument have formed a backdrop to the lives of Kazakhs. The melodies of the traditional dombra strike a chord with Kazakhs in a way that’s hard for non-Kazakhs to understand, evoking memories of ancestors, of family, of first loves, of patriotism.

Soviet leaders understood the dombra’s role in maintaining Kazakh identity, and tried to stamp it out, believing that anything fostering ethnicity hampered the creation of a workers’ paradise. Since independence, the instrument has enjoyed a popular revival.

The dombra is such a deep part of the Kazakh psyche that it’s become one of the key symbols of the country’s nationhood and culture, along with horses, the tent homes known as yurts, the steppe, the blue sky, the eagle and the Golden Warrior Prince. “When you play, you feel everything from our history, the time of our ancestors,” said Murager Sauranbayev, one of Kazakhstan’s youngest yet most accomplished dombra players.
Sauranbayev began playing at the age of 15 and was so good that within a year he was the only dombra player in the Kazakh contingent at the World Championships of Performing Arts in Hollywood.

Since then, Sauranbayev has performed dozens of times in Kazakhstan and in Turkey, Russia, Ukraine, China, Korea, Malaysia, Mongolia and Tajikistan. He’s been on television many times, and Kazakhstan radio stations play his music.

No one knows how old the dombra is, but lutes stretch back to antiquity – thousands of years. So the dombra has had a long time to reach the depths of the Kazakh soul.
The question of where the dombra originated also is a mystery because it and its cousins can be found throughout Central Asia, the Middle East and China. Music scholars argue about whether it originated in Central Asia and spread east to the shores of the Mediterranean Sea, or whether it originated along the Mediterranean and spread west.

While the basic form of the instrument is the same as it was long ago, the dombra has evolved over the centuries, said Sauranbayev, a native of Taraz in southern Kazakhstan and now a 24-year-old member of the Ministry of Foreign Affairs press relations team. For example, today’s version “is bigger to make the sound louder.”
Almost every Kazakh family has a dombra, whether or not someone plays, Sauranbayev said. “We believe there should be at least one dombra in a Kazakh home,” he said.
Children often begin playing the dombra as early as five or six years of age.

“When you play the dombra, you feel good,” Sauranbayev said. “On days when I’ve had unhappy news or troubles, I’ve taken my dombra to my room and begun playing – and I managed to relax.” 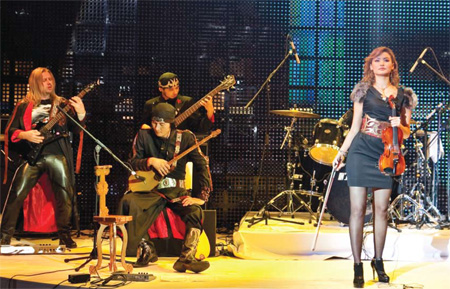 One thing that amazes foreigners is the range of sound coming from an instrument with only two strings, Sauranbayev said.
When he was at the World Championships of Performing Arts in Los Angeles nine years ago, musicians from other countries and journalists were so intrigued with the dombra that they asked him many questions about it. “How can those two strings produce so many sounds?” was the most common.

The great 19th Century musician Kurmangazy Sagyrbaev devoted much of his life to preserving Kazakh music, and Sauranbayev wants to do the same.
He noted that dombra masters in villages throughout Kazakhstan have composed wonderful tunes, many of which they haven’t written down. A lot of the tunes are spiritual or religious in nature, really touching the heart, he said.

Sauranbayev is afraid that when the village dombra masters die, “no one will know about this music. I want to visit these villages and talk to the elders to learn about this music.”
His ultimate goal would be to produce a book that preserves the tunes. To introduce the compositions to Westerners, he’d like to see a version in English.
Preserving this ageless village music would help ensure that the dombra remains an integral part of what makes a Kazakh a Kazakh.

“The dombra is the soul of Kazakhs,” he said.