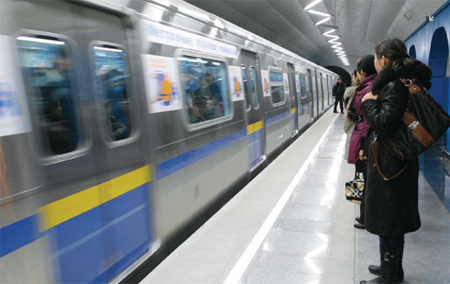 It took 23 years to give the 1.4 million inhabitants of Almaty their first subway, but it was worth the wait. The first 8.56 km stretch of track and first seven passenger stations of the new rapid transit underground rail system opened in December 2011 and Almaty residents tell EdgeKz Magazine they are excited to have it.

“I don’t have a car and I travel on buses. In comparison to the mass transit buses, there are no crowds. It’s clean and it’s fast,” said Ludmila Smertina, a 65-year old retiree from Almaty. “Right now there is slush and mud on the streets, but the subway is neat and comfortable.”

When fully completed, the metro system will total 45 km of track on three lines. Construction has started on an extension line to the western suburbs that will add five stations. And work on a 17 km-long second line is scheduled to start next year. We have been waiting for the opening of the subway,” Almaty school teacher Inna Fedorenko, 40, told EdgeKz. “I hope that the second phase will start as soon as possible and quickly reach into the (outer) neighborhoods.”

But it’s not just the system’s convenience that is winning praise. The new metro has also already been included on the list of the top ten “coolest” and most beautiful subway systems in the world by the TheCoolest.com website. “The world’s youngest subway is immediately amongst the world’s most beautiful, featuring a design character that is at once modern and classical. Stained glass windows, geometric paint patterns, glossy floors and ornate chandeliers make this subway system a destination in its own right,” the website wrote. 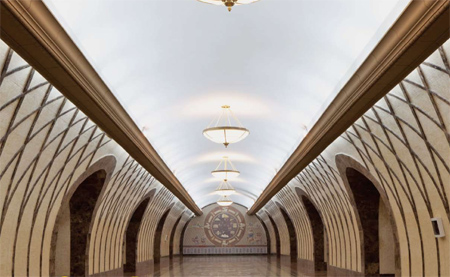 TheCoolest.com lists the Almaty Metro alongside the famous Washington, DC, and Moscow systems. Almaty’s system is much smaller but equals or surpasses the others for its unique design and atmosphere. Stations and tunnels shine in turquoise blue and their arches and entrances are shaped in the design of traditional Kazakh caravanserai, or inns along the Great Silk Road. Stained glass windows glow with unique designs.

Ornate chandeliers grace many of the tunnels. And giant, specially commissioned paintings of richly colored scenes from Kazakh history and culture adorn the walls. Ornate glazed tiles on the walkways also display traditional artistic motifs and architectural designs. As a result, the metro offers not just a quick commute across Central Asia’s main business center, but a visually pleasing refuge from the bustle of 21st century life on the streets above.

“I really like our subway,” said Olga Bobrova, 26, of Almaty. “If you compare it, for example, to Paris… It’s wide and beautiful.” The metro project is a pioneering one. Only one other subway system has been built in Central Asia. That system is in Tashkent, the capital and largest city in Uzbekistan.

The Almaty system currently includes four deep-level stations and three sub-surface stations. Seven gleaming, sleek trains service the first line. The construction cost is estimated at around $1.1 billion. Construction of the eighth and ninth stations in the system, Sairan and Molodezhnaya, has already begun. Today, passengers can ride the first section of Line One beginning at the Rayimbek Batyr terminus and pass through the five transfer stations of Zhibek Zholy, Almaly, Abai, Baikonur and Auezov Theatre before coming to Alatau. Work is underway to extend Line One from Alatau to Kalkaman, a residential district on the outskirts of Almaty. Line 3 will connect the Rayimbek Batyr in the commercial heart of the city to the Almaty-1 railway station in its northern suburb. 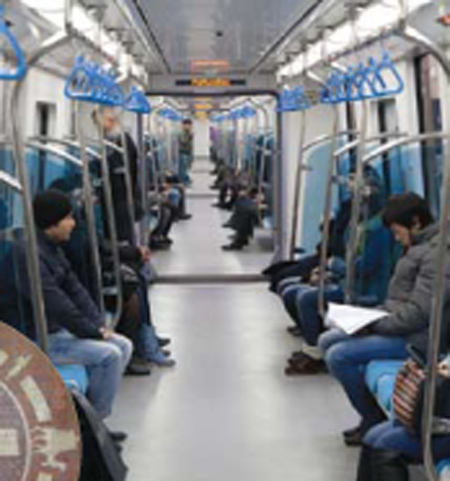 South Korea’s Hyundai Corporation won the $150 million contract in December 2007 to build the 28 electric multiple unit (EMU) trains for the system as well as the vehicle depot tools, escalators and signal systems. The system was designed by the Kazakh Metroproject company and its construction was carried out by Almatymetrokurylys, a special company set up for the purpose.

The first stage of the system can carry 26,000 commuters and runs seven days a week from 6 a.m. until midnight, and has won a reputation for cleanliness and safety. The trains and walkways are monitored by 29 security systems. The transit system is also an important component of Kazakhstan’s strategy of encouraging renewable and environmentally clean energy: When completed, it’s expected to replace no less than 300 surface bus routes. This will dramatically reduce congestion on Almaty’s teeming streets and reduce the discharge of greenhouse gases. The system has also been designed to the highest international safety standards. Its tunnels have been built to be earthquake-proof.

Almaty has always been a city loved for its leafy charm, wide boulevards and spectacular mountains. The new Metro system is a major step towards preserving that gracious legacy and ensuring the city’s rise as the business capital of Central Asia. “Today is an exciting historical day for our country, when Kazakhstan’s first metro facility was put into operation,” President Nursultan Nazarbayev said during a commissioning ceremony in December 2011. “It is a great gift to the citizens of Almaty for the (December 16, 2011) celebration of the twentieth anniversary of our country’s independence.”