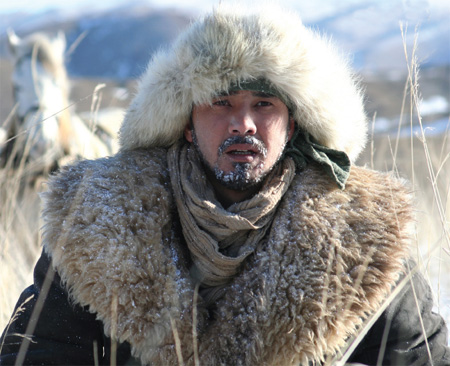 Berik Aitzhanov has the chiseled features and ethnic good looks you would expect of one of Kazakhstan’s most popular film stars. He is also currently appearing in one of the largest and most internationally recognized films in the history of the young country, Zhauzhurek Myn Bala. But this 33-year old actor who grew up in Almaty carries none of the ego of many film stars and says he is just getting started. “First of all, I don’t consider myself a star,” he told EdgeKz. “I am not hiding behind the ‘modest-but-yearning-for-attention’ mask either. I am straightforward and don’t like hypocrisy.”

But despite this low profile, people are starting to take notice, and he acknowledges some sense of responsibility as a public figure. “There are times when I get invited to TV shows and I get recognized on the streets by people, older and younger. I want to be an example for our youth, not an idol. I want the next generation to say in the future something like ‘Well, if Berik can do this, why can’t I?’ – I would like to be a good example. This is my principle.”

Though he’s one of the stars of the new Kazakh epic Myn Bala, Aitzhanov actually had to learn the language that matches his features at the start of his career. “I graduated from a Russian high school. I started my career at 21 and I’d never read a book in Kazakh before that. Of course, there are both Russian and Kazakh acting schools, but I look Asian, so it was recommended that I learn Kazakh to be able to portray Kazakh characters.” His parents were never worried about his risky career choice – only the language challenge that comes from living in such a multi-ethnic society. “My parents weren’t against [acting], they just doubted that I could study in Kazakh.” His success, however, never seemed to be in doubt. “My parents were happy when I decided to study acting because before that I’d had problems choosing what to do. As for the risk, my parents were somehow sure that I would be successful, because they saw my passion for acting. Unfortunately, my father didn’t get the chance to see me in any of my roles… My mother is happy to see where I am in my life, of course.”

Now that he’s got the language skills, what Kazakh heroes would he like to play? “In our great steppes we had so many epic heroes, khans, akyns, that we have to talk about all the time. They were people who fought for our freedom, for our idea of Kazakhstan and its people. There are too many. I would like to try both khan roles and batyrs, although I have already played some of them.” He currently is appearing as Khan Abulkhair in Myn Bala.

But while these heroes of an older tradition are enjoying a revival, there are other, forgotten heroes on Aitzhanov’s mind. “In the near future, I’m very interested in playing World War II heroes. Kazakh Film has only produced five or six movies about World War II. There are films about Baurzhan Momushyly, Aliya Moldagulova, Manshuk Mametova – but I wish I could introduce more heroes. We have many more: Adi Sharipov, Talgat Bigeldinov, Rakhymzhan Koshkarbayev, Kasym Kasenov. We need to make movies about them, and stage spectacles. It is unfair that now we are forgetting about them; they shed blood for us.” 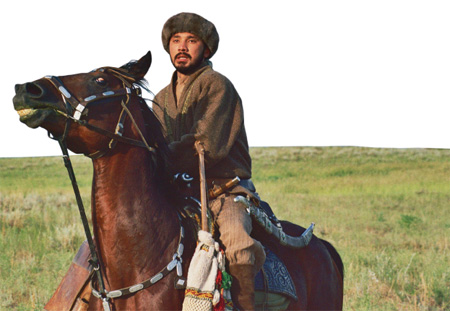 It’s not only Kazakh heroes who inspire the actor, however. “I would play Macbeth with pleasure”, he says. Aitzhanov’s first role was Laertes, in Hamlet. In fact, Aitzhanov is known for his seamless transition from theatre to film. It’s a change he’s asked about often and he smiles when it comes up again. “I’ve answered this question too many times,” he said. “At this point of my career, I can afford to switch between the two industries. I have been an actor in the Kazakh Academic Drama Theatre named after Mukhtar Auezov for over eight years now.” Having made his mark on stage, it was time to make the leap. “The first day I had the chance to submit my documents to Kazakh Film, I applied to be in movies.”

The transition wasn’t simple. Acting on stage and acting in movies require different tricks and techniques. This is not yet reflected in the acting schools in Kazakhstan, however. “In our country, for some reason, we don’t have different schools [for film or theatre acting], just theatre. I had to pick up film acting experience along the way.” Despite the recognition that has come with film, Aitzhanov’s theatre experience remains significant to him. “Coming back to the question of what’s closer to me,… two or three years ago, I would have said undoubtedly film, because it was movies that really started my career. But I’ve changed my point of view now. I would say both experiences are valuable to me.”

Don’t look for him to switch to TV next, though. “Television, well – it’s too much propaganda. I’m not very interested in it, not to offend any professionals in that field.” As an Asian-looking, Russian-speaking citizen of this socially complex nation, however, television may yet have some benefits. “It does have social influence. Television can show and express multi-cultural life, praise the country and the government.”

Now that he’s embedded in the film world, where would Aitzhanov like to see the Kazakh film industry go? “Under Kazakh Film President Ermek Amanshayev, Kazakh Film in the past four years has made so much progress. Ermek Amanshayev (I must repeat) works so hard for Kazakh Film, participates in movie festivals, ensures that our local movies get recognized, all this shows his work.”

“In the future, I’d like to see the Kazakh film industry create more of a producing character, in terms of investment, so our rich people would contribute into it. And so our government would also support us, because the film industry is our national face, showing the pride of our country, propaganda about our country. Look at American movies. In almost 80 percent of their movies they have some kind of propaganda of love for their motherland in some form: an anthem, American flags. Isn’t this propaganda? Our industry is advancing pretty fast right now, but there’s so much to be done.”
And clearly Aitzhanov believes Kazakhstan has the talent to get it done. “We don’t lack producers or actors. Just about five months ago I was in Los Angeles taking acting lessons, and every year about 10 people go there from Kazakh Film to study producing or cinematography. There are talented guys that write plots at a world-class level. We have producers, directors and cameramen who know what to do to ignite or inspire our film industry.” 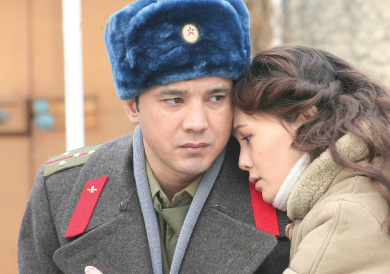 And for his own future, Aitzhanov insists he’s not yet a star. “At this point, I have not achieved anything, to be honest. There are certain things on my list, but still I’m nowhere near the career peaks that I’ve assigned myself. I’m one hundred kilometres away from them, so to speak. I’m making progress in centimetres, you see, so I have a long way to go. My goal is to work hard. Sometimes I feel I’m hostage to my own sloth. It stops me from doing certain things in life that I then regret later. Work, work and work, that’s what I have to do.”
He won’t say whose career he might be working toward. “There is a saying – ‘don’t make idols’. I like a lot of actors; I don’t want to name any names.”

The advice against making idols is something Aitzhanov wants to pass on to the next generation of Kazakh actors. “My advice for the new generation is to stand out, be original, be the only one. Once, I was a young actor just starting out. Now I’m taking steps in movies and theatre, but I have the seething, gnawing feeling that I don’t know even two or three percent of what I want to know about acting. If you decide to become an actor, you must really be in love with and devoted to this profession.”

Berik Aitzhanov’s latest significant role, Khan Abulkhair, comes in a very big movie: Zhauzhurek Myn Bala (a thousand brave men). Everything about this picture is epic – the panoramas, the cast, the battles, and the story about a boy who loses his family, discovers love and friendship, and rallies the thousand men (boys, really) of the title to fight his enemies.
It’s been 20 years since Kazakhstan gained its autonomy, and independence is on people’s minds. Zhauzhurek Myn Bala commemorates another fight for independence, this one from the 18th century, when the country was under the thumb of a tribe of Mongols called Dzungars. Teenage warrior Sartai and his band of young fighters help take them on in hopes of achieving a free nation of their own, foreshadowing more recent struggles.

In addition to the story of this battle, Zhauzhurek Myn Bala has a more contemporary story to tell, one about the country that exists now. The film was shot on location, in the Kazakh language, using Kazakhstan actors in all the major roles and employing the renowned “Nomad” stunt group.